A POSTIE has revealed how he is being terrorised by a customer’s “sex-manic” duck while out on his rounds.

The crazed bird first began attacking postman Steve Hinds on Saturday, when he attempted to deliver a letter to the duck’s owners.

The 58-year-old has been back twice since then and vowed not to return to the home in Mansfield, Nottinghamshire until “Bob” the Muscovy duck can be properly contained.

His owners have since apologised to Steve with a hilarious note pinned to their gate, revealing how they too are at the mercy of their “vicious” pet.

Steve shared a photo of the note he discovered yesterday [Wed] which reads: “To our postie.

We are so sorry Bob has been attacking you. He attacks us too.)

“He used to be lovely and cuddly, now he is a vicious sex-manic. We have penned him and hopefully he won’t escape.”

Another snap shows how the owners also gifted Steve a Crunchie chocolate bar as a peace offering following the attacks.

Steve also shared a clip of him facing his nemesis in the garden, where Bob can be seen checking out the postie who films him from behind the protection of a wall.

Luckily, Steve saw the funny side and took to Facebook to share the message, saying: “Lovely apologetic note from one of my customers today about the duck that attacked me.”

His post has had social media users in stitches.

Hazel Isgate wrote: “Aw that quacked me up and I was feeling a little ‘down’.”

And Matthew Watson said: “Worth it for the Crunchie.”

Speaking today, Steve explained: “I went through the gate to deliver the letters and the duck started hissing at me, and as I turned around to head toward the gate it ran me up the path snapping its beak.

“ I had to shoo it off with my letters. Anyway on Monday, the lady had a parcel, but I took it to the neighbours’ and told them to have a word with the lady for me.

“Yesterday when I went I found the note on the gate with a Crunchie bar.

“I went through the gate as it was fenced off from the duck’s now, delivered the letter and the duck got through the fence again while the neighbours were watching!

“I’m hoping after today they will fix the fence so the duck can’t get through or they won’t be getting their mail.

“I was surprised by the not though, I thought ‘how nice is that?’ It makes you feel appreciated.”

Bob’s owner, primary school teacher Donna Wilson today said: “We bought duck eggs during lockdown for something to do and Bob was hatched on 5 May.

“He is lovely, he’s so handsome and at the start he loved us.

“He was so cuddly and we were feeding him by hand, but now he’s reached male maturity and he has just become a vicious sex-maniac.

“He chases everyone, the postman, the pizza delivery man, me and my girls. We’ve all been pecked.

“I didn’t even know he’d been attacking Steve until my neighbour said, so now I’ve fenced him in,

“We also have another female duck named Teddy, who regularly has to succumb to his amorous advances.

“He’s just full of testosterone and hormones, he is wild.”

The mum-of-four says the behaviour is common among ducks and fears that it might outlast his teenage years.

Donna, 45, added: “Apparently they just carry on being aggressive.

The worry is if he starts to hurt Teddy, we will probably have to split them up.

“We love him, but he is horrible.

“People keep joking we’re going to have to have him on Christmas with orange sauce.” 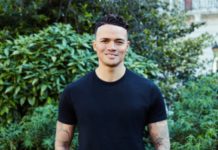