A FATHER-of-two who was made redundant twice while studying has managed to secure a degree with distinction – all while supporting his cancer stricken wife.

James Homan from Currie, Edinburgh, was awarded the prestigious accolade from Edinburgh Napier University this week.

The 44-year-old achieved a Masters in Business Administration, despite caring for his sick wife, Lindsey, 48, and losing his job twice amid the Coronavirus pandemic.

James, who has two daughters, Olivia, 14, and Ruby, 11 was just one month into his studies when he lost his job in the Scottish capital.

He found new employment within weeks in the shape of a contract role in Dubai and began work just two hours after touching down in the Emirates.

The contract ended in August last year and after recommencing his studies at Napier, James was offered a job in London.

However, the family was headed for more heartbreak, as in June Lindsey was diagnosed with breast cancer.

James was also dealt another blow after being made redundant for a second time from his Sales and Marketing job in London.

However, with the support of his family, James was able to push through and went on to earn the top class degree.

James explained: “In June this year, my wife was diagnosed with breast cancer, which knocked us all sideways.

“It was time to take stock and focus on what was important in life, which perhaps meant putting the final part of my MBA – the research project – on hold.

“After liaising with my wife, my tutor and even my kids, and after very careful deliberation, we decided I should continue the project, push through and hit the August deadline.

“As long as I could provide my wife and family with the necessary emotional support and be able to focus there was no reason to put the project on hold.”

James added: ” I’ve been trying to think of the best adjectives to use but it was just fabulous, it made it all worth while it was one of the best achievements I have had in my life so absolutely cloud nine.

“I’m not going to lie, it did cross my mind a few times of course, not giving up but certainly delaying it and coming back to it in the future.

“My family was absolutely thrilled. The only disappointing aspect is there is no graduation, but still doesn’t make any difference and still doesn’t take away the achievement and the great feeling.

“If you are utterly convinced that what you are doing is worthwhile then just never give up.”

James has now secured work as a Business Development Director.

His wife Lindsey added: “He always made me smile because mid-way through each module he would complain that it was the hardest unit he had done yet – no matter what the subject was – yet every time he would pull it out of the bag and he managed to achieve an overall distinction.

“Through sheer determination and hard work he did it, and we’re so proud of him.”

“I would have completely understood if he had wanted to pause his efforts and told him so, but I also reassured him that I was sure he could pass.

“I was absolutely delighted when his work achieved a distinction level.” 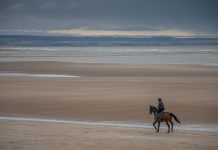