A SCOTS dad has gone viral after he poured a can of Tennents into a vase that was supposed to be used for his wife’s new flowers.

Josh Coyle, from Paisley in Renfrewshire, revealed how his dad had hastily resorted to the receptacle before sitting down to watch the football.

Josh’s dad has perfectly poured the Tennents into the vessel, leaving a perfect head atop the golden lager.

Josh posted the comical scene on Twitter yesterday  and explained: “Mum left out a vase to put her new flowers in and my dads filled it up with Tennents for the game.”

Since posting, the snap has gone viral amassing more than 65,000 likes in less than 24 hours.

Social media users love the picture and think that Josh’s Dad is a genius for his quick thinking.

@monotonous65 posted: “Your dad is a very resourceful man. I applaud him.”

@RLEVATORI commented: “That my friend is what I call a legend of a man.”

Tennents even waded in to show their approval, saying: “When there’s a T, there’s a way.”

Josh explained that the item would forever more be used as a pint glass.

He said: “That will be it now, no longer a vase now a tumbler.”

House for sale: 3 bedrooms, one bathroom – and body of previous owner in garden 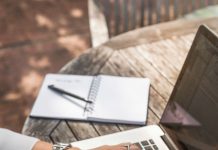