AN NHS worker has been nominated for the prestigious Modern Apprentice of the Year award.

Tamara Kamal, from Edinburgh has been nominated for the award while while working for NHS Lothian during the pandemic.

23-year-old Tamara said the past 11 months working as an apprentice with NHS Lothian in the face of a devastating pandemic has been an extremely challenging chapter in her life but says the skills and backing she received throughout her apprenticeship proved vital.

Tamara said: “Working on the very frontline of the pandemic has been nothing short of frightening. You’re faced with loss of life almost every day and it has a serious impact on your mental health.

“Thankfully my training has helped me during these difficult times and I’ve had the support of my team.

“They’ve always pushed me in the right direction throughout my apprenticeship – I owe it all to them.”

Tamara has been nominated for Modern Apprentice of the Year – Level 6+ at the upcoming Scottish Apprenticeship Awards, delivered by Skills Development Scotland, which are scheduled to take place virtually on 4 March.

She added: “I was amazed because I didn’t ever think I would get the opportunity to work for the NHS and just to be a small part of such a huge organisation is incredible. I’m ecstatic that I’ve done my apprenticeship with the NHS.

“I didn’t even consider apprenticeships in school. I thought the only options available to me would be to go to University or College, the thought of starting an apprenticeship never even came into play.

“My apprenticeship started in September 2018 and the end game was always to become a nurse – it was just a case of trying to find the right pathway and thankfully the apprenticeship has enabled me to get there in the end.

“Now I’m currently studying for an HNC in Nursing and I smile every time I think about the journey I’ve been on. Thanks to my apprenticeship, I’m now doing nursing and it still doesn’t seem real!”

Tamara says more people should explore the possibility of starting an apprenticeship.

She said: “I would say it was incredibly important for everyone to be made more aware of the opportunities presented by apprenticeships, no matter their ethnicity or background.

“Apprenticeships provide another path to careers that most people would never have thought of pursuing; I certainly didn’t and now I’m on course to become a nurse.” 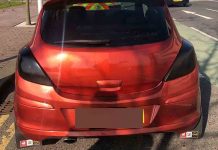