AS the restrictions in many parts of Scotland are easing, people are excited to get back to shopping and eating out.

The people of Edinburgh and most of Scotland will be enjoying getting back to normal as many places are now in tier 2 of restrictions.

For Glasgow and Moray, however, there will be no change as these areas still have significant numbers of covid cases.

Shannon Milmine went to Glasgow to ask people what they thought about staying in the current restrictions.

Andrew Kemp, 23, a software engineer from Drumchapel, expressed his fury at the continuing restrictions, he said: “I’m quite angry about still being in level 3, I feel like it has been years since I was able to meet my friends in a pub.

“A lot of my plans had to be rearranged, some at my own expense, I’m just so disappointed and sick of this whole situation.”

He added: “Glasgow has had restrictions for so long now, it feels like this is never-ending and it’s draining.”

Caitlin Borthwick, 25, manager at McDonald’s from Glasgow, is remaining optimistic about the situation, she said: “It is disappointing that Glasgow is still in level three, but it could be so much worse.

“We can still meet up outside for drinks, we can still go for dinner inside, so I’m looking at the positives.”

She added: “I’ve had to cancel so much the past year, but now that the weather is getting nicer and the beer gardens and restaurants are allowed to stay open, I’m glad I can finally catch up with friends that I’ve not spoken to in ages.”

Remaining in level three is a bittersweet feeling for some Glaswegians, Callum McLeod, 21, is a Nurse from Knightswood and he has said: “I am quite upset that we are staying in level three, it feels like a kick in the teeth after following the rules for so long.

“I feel like we’re almost being left behind by the rest of Scotland, but I know it’s to help stop the spread and if it means extra time in lockdown, I’m happy with that.”

Jack Urquhart was on the opposite side of these restrictions, asking people in Edinburgh about getting back to normal.

Steven Thorpe, 42, the General Manager at Froth and Flame, in Edinburgh said: “It’s been a real boost having customers being able to eat and drink fully indoors with us again.

“After months of lockdown, it’s a relief to see our regular customers again as well as so many new ones.

“Having customers drinking indoors again is great as it saves people shivering under an umbrella while enjoying a pint.

“We were quite apprehensive to open again but 99% of customers are well behaved and we have all the correct COVID safety measures in place so it’s just good to see people back enjoying themselves really.”

Micheal Carrell, 23, hospitality worker from Edinburgh added: “I was very excited for everything to reopen again but was slightly apprehensive as I didn’t want Edinburgh to fall back into the lower tiers and go into lockdown.

“I was most looking forward to the gyms reopening, you can do home workouts but you never really get the same effect as going to the gym.

“I do think on Fridays and Saturdays you notice the atmosphere around the city a lot more, it definitely changes a bit and is almost like what it was before COVID happened.”

Tony, 56, a Barber at Bennys on Grove Street said: “Initially we were quite busy with barbers opening from the 5th of April but it has gotten quieter again as all the offices are still mostly working from home.

“I was excited to be back to work after months off, mainly just to make some money again.

“After the initial rush is over I will probably dine-in restaurants again I will just let the madness settle while everything is so new.” 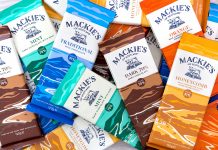