A DRUNKEN punter has written a grovelling apology to an Scots bar after being chased down the street by staff for stealing a plate and thermometer.

The self-confessed “Very Sorry Plate Thief” said she had “copious amounts of wine and cocktails” before her escapades at The Huxley in Edinburgh earlier this month.

Whilst waiting for an Uber, the anonymous “plate thief” admitted to taking her burger and plate outside – resulting in her being chased down the street by bar staff.

The customer was finally caught red-handed and handed over the stolen plate but said she had “many regrets” after the boozy session.

After being too embarrassed to apologise in person, she decided to type up a grovelling apology which she left alongside a stolen thermometer and KitKat bars.

The lengthy and polite letter, dated May 10, read: “I was at your establishment over the weekend having a beautiful time.

“I had been drinking throughout the day, to the point of many regrets.

“After copious amounts of wine and cocktails, I somehow became extremely infatuated with one of your thermometers and in that process, decided it would be a brilliant idea to take it home with me.

“According to my friends, after a few more drinks in your outdoor seating area, I have no recollection of. 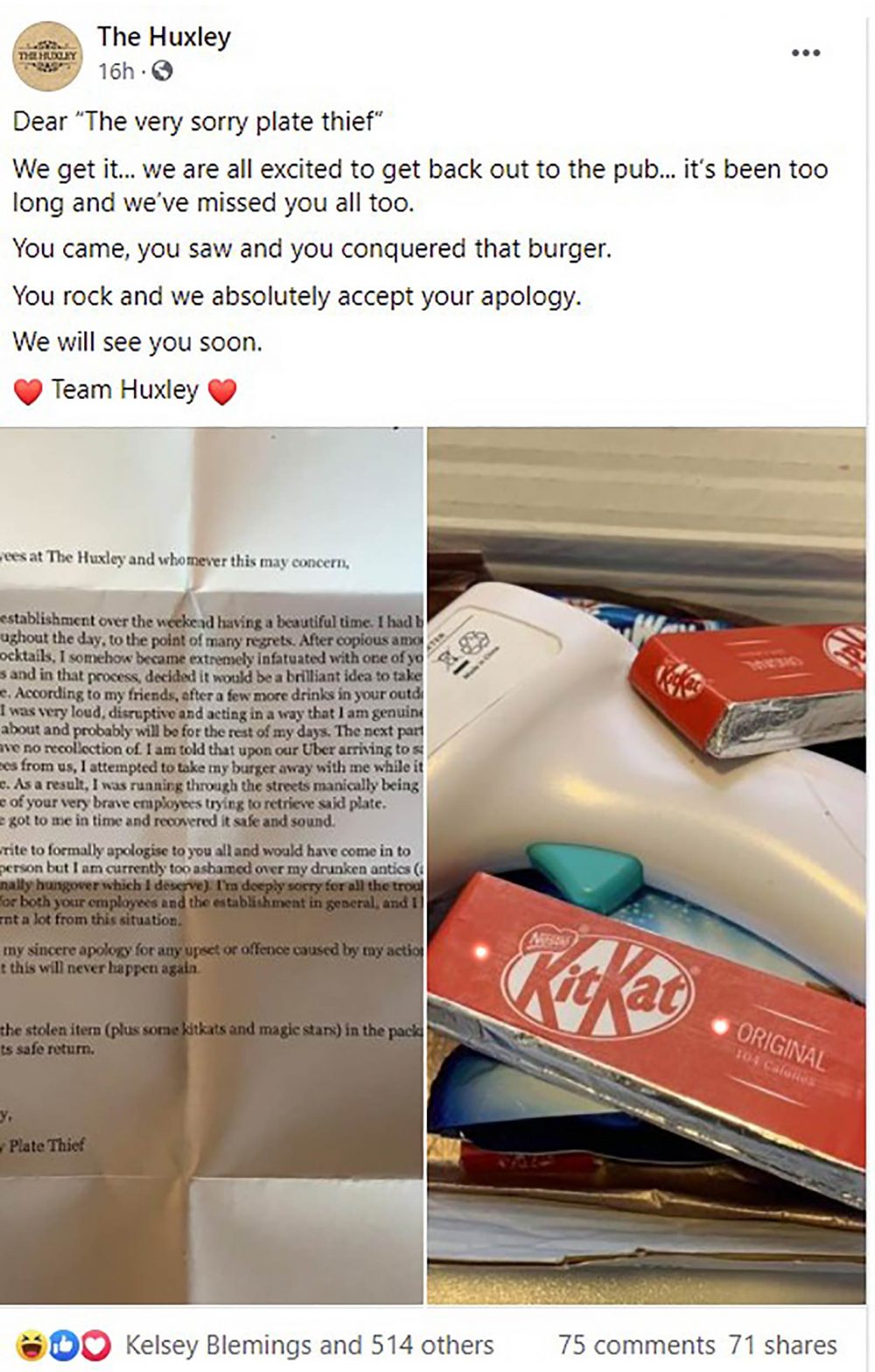 “I am told that upon our Uber arriving to save your employees from us, I attempted to take my burger away with me while it was still on a plate.

“As a result, I was running through the streets manically being chased by one of your brave employees trying to retrieve said plate.

“Thankfully he got to me in time and recovered it safe and sound.

“I wanted to write to formally apologise to you all and would have come in to apologise in person but I am currently too ashamed over my drunken antics (and also exceptionally hungover which I deserve).

“I am deeply sorry for all the trouble I have caused for both your employees and the establishment in general, and I have definitely learnt a lot from this situation.

The letter is then signed off by “The Very Sorry Plate Thief”.

“We get it… we are all excited to get back out to the pub… it’s been too long and we’ve missed you all too.

“You came, you saw and you conquered that burger.

“You rock and we absolutely accept your apology.

The post had over 500 likes and 70 shares with many in stitches over the customer’s antics.

Isabelle Falkingham said: “This is why it’s the best place in the world” followed by a crying laughing emoji.

And Loretta Smith added: “This is goals. Plate thief.”