A DOG owner has issued a warning over pets playing with toys at the beach after her beloved pooch’s intestines ended up clogged up with sand.

Chelsea Finn’s labradoodle Dolly fell ill after hours of playing fetch at the beach and was found in an X-ray to have her intestines blocked with sand.

The vet informed Chelsea that Dolly may have to undergo an operation and be vulnerable to sepsis after digesting so much sand.

However Chelsea, from London, was thankful when Dolly was discharged after two days in the vets without the need for surgery.

Chelsea was shocked to realise that a normal game of fetch could have led to catastrophic consequences.

She later discovered that every time her pet had collected the ball to bring back to her she had ingested sand residue.

The X-ray shows how the poor dog’s innards had become almost entirely congested with sand.

Chelsea shared the image on Facebook earlier this month in a bid to warn others about the unfamiliar dangers of playing fetch on the beach.

She wrote: “We took Dolly to the beach on the weekend and were playing fetch with her ball.

“It wasn’t until later on that day we realised something was wrong.

“She was clearly uncomfortable, grouchy and couldn’t keep anything down.

“We decided to take her to the out of hours vets where we were staying.

“Luckily we did as she had sand impacted in her intestines as you can see in the X-ray she was completely blocked up.

“We were told she’d most likely need an operation and a long recovery and the chance of sepsis etc.

“However we were lucky that after two nights in the vets and lots of TLC she was discharged.

“This happened because every time she collected the ball, residue of sand was ingested.

“We never thought something like this could happen and wanted to make people aware to prevent this from happening to anyone else.

“She is now perfectly well and we are so thankful.”

The post has now collected over 24,000 likes, 100,000 shares and 13,000 comments from Facebook users who were thankful of Chelsea raising awareness on the issue.

“So glad this had a happy ending.

“Thank you for sharing!”

Geoff Gooch added: “Thank you, I would never think this could happen but your warning will save lots of dogs.”

Carole Schnaars commented: “This is such important information and so glad you shared it with us.

“I hope you don’t mind, but I think this needs sharing.

“So happy to know that your beautiful girl is home and has the all clear from the vets.”

Luann Laundcher replied: “Thanks for posting.

“I am on the beach daily with my dog but do not throw balls for her.

“This is good information!” 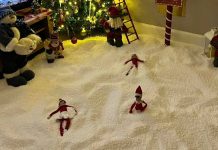