Following in his father’s footsteps at the VW converters, 16-year-old, Calum Winter, is the latest recruit to the Jerba Campervans team after embarking on a four-year trainee programme.

The Haddington teenager was encouraged by his local high school to apply for the position and explore his passion for carpentry.

The former Knox Academy student left school in May, and is on the cusp of completing the interior furnishing of his first campervan under the watchful gaze and stewardship of lead carpenter, Ian Adkins 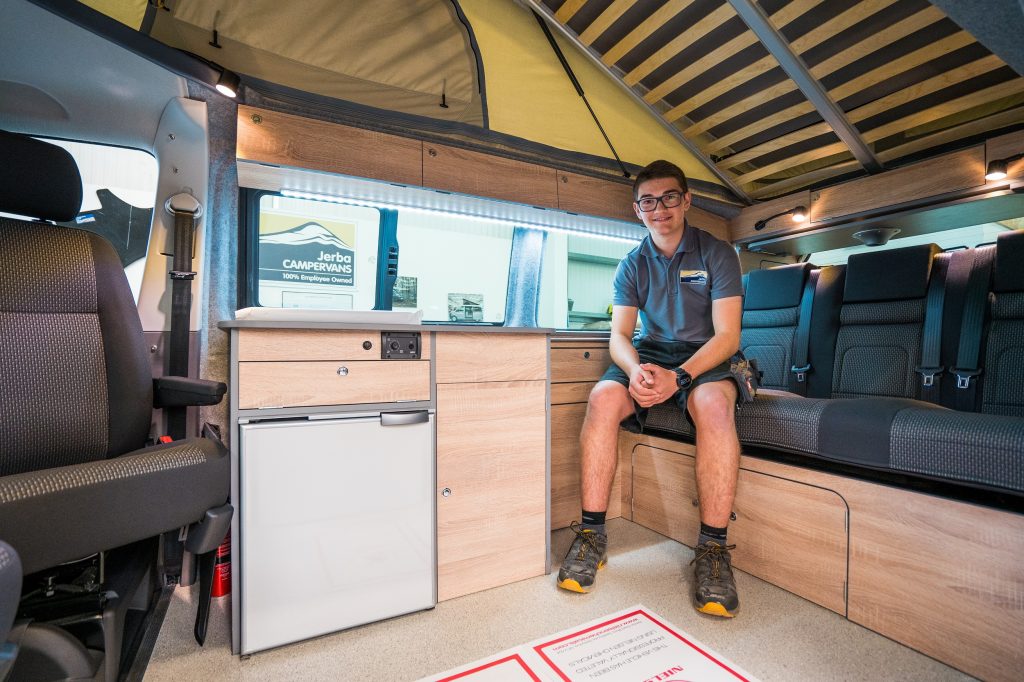 Calum said: “I’ve always liked working with my hands, for years I have been riding and repairing trials motorcycles, and so when I was told about this opportunity I knew this was a great chance for me to pursue this passion of mine further.

“I am discovering new tools and practices that I haven’t used or done before, and cutting, scribing and preparing all the furniture has been a big task which made me a bit nervous at the beginning. However, Ian has been supporting me every step of the way, so I’ve been getting to grips with things relatively quickly.”

The trials motorcycle enthusiast Calum is also working alongside his dad, Operations Manager Alan Winter, who has been with the North Berwick-based firm since October 2018.

Calum said: “It’s a bit unusual working with my dad, but he is in a different department from me so I don’t see him often. I finish at 4pm and he finishes at 5pm – so during that hour each day I do my own little projects like making chess boards and chopping boards.”

Operations Manager, Alan Winter, said: “I am so proud to see him getting on so well at his apprenticeship. I wasn’t aware of him getting the apprenticeship until after he told me. This is such a great opportunity for him to learn and grow in the craft.” 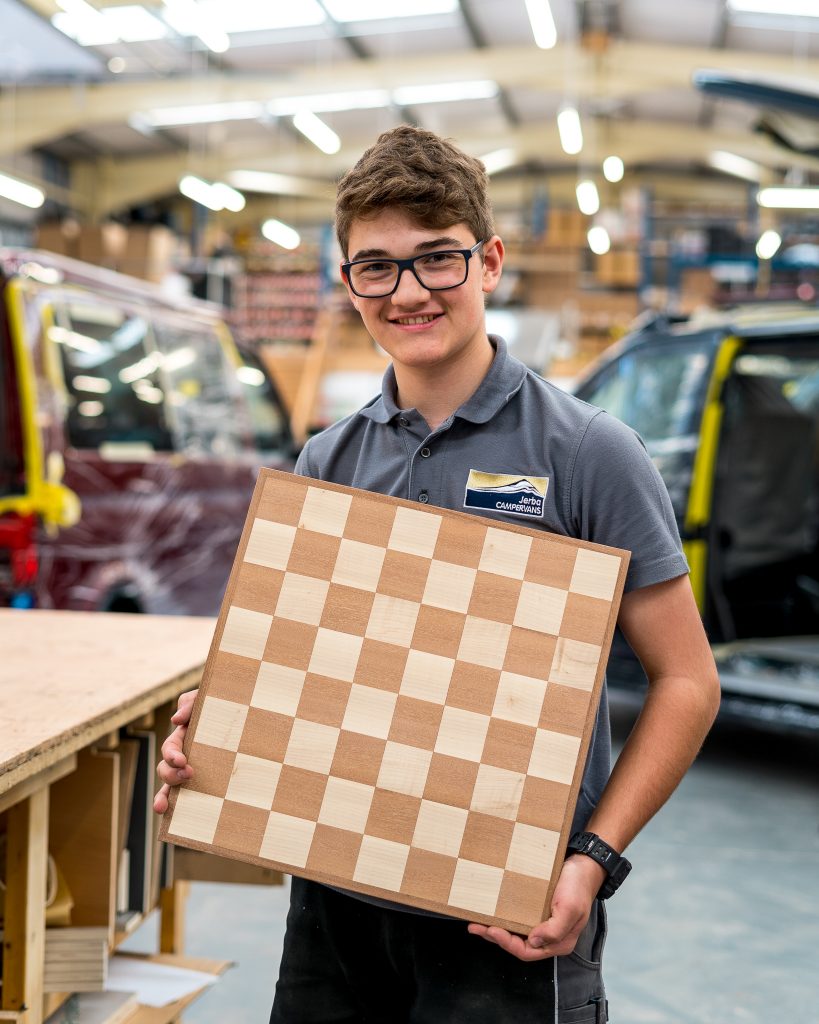 Calum has been assisting lead carpenter Ian in constructing his first van which is due to be completed this week.

Calum added: “I get to do things that I never thought I would get the chance to do. The van I am working on is our Cromarty model and it will be the very first I have helped complete from scratch. It’s been a really great experience learning how to fit and cut the interiors of these vans.

“It’s a good feeling to know you are building someone’s dream. I’m very proud of myself and the work I’ve been doing here.

“I hope my experiences in the last eight weeks will go a long way helping me further my knowledge and expertise in years to come.”

As well as training and supporting younger generations, the small firm invests in its workers and is committed to sharing its knowledge and company ethos within the wider community, inspiring others to transition to an employee ownership model.

Converting Volkswagen T6.1 models, the North Berwick based firm is officially recognised by Volkswagen as a Motorhome Qualified Converter, and is the only firm in Scotland to receive this qualification.

With a dedicated and flexible team, the Jerba Campervans’ family adapts to the needs of their customers, creating a house on wheels with the highest UK level of road safety, assuring customers of a safe, and stylish ride.

To find out more about Jerba Campervans, visit www.jerbacampervans.co.uk

Swimming lesson providers dive in with Learn to Swim recovery