The secret to having a ten year career

Watch Out for These 10 Common Causes of Workplace Accidents

When Snapchat initially took the world by storm as a picture-based social media platform more than a decade ago, few could’ve anticipated that its parent company, Snap Inc, would go on to become one of the biggest names in augmented reality. But here we are, and Snap’s share price has enjoyed a rally to unprecedented highs in Q3 of 2021. However, at a market cap of almost $120 billion, is Snap’s current price sustainable? 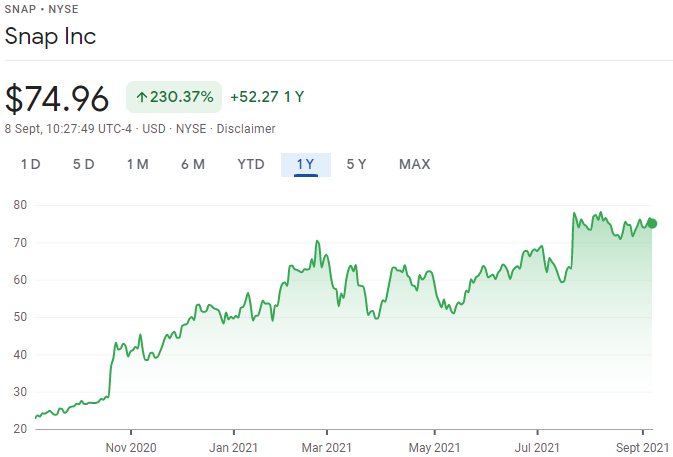 Snap Inc has long been identified as a leader in the augmented reality landscape since the company went public in 2017. Despite starting life as a social network for users to share pictures, Snap has since prioritized its business model on the development of cutting edge reality technology.

As the chart above illustrates, Snap’s performance over the course of the past 12 months has been nothing short of extraordinary. The stock has accumulated 230% in value at the time of writing, powering towards a share price of almost $75.

This impressive performance is largely down to Snap’s push to become a global leader in AR through the development of Snapchat Spectacles – which are glasses that have the ability to deliver immersive experiences.

Snap’s looked beyond the development of such technology and has looked to its potential use cases. This includes more immersive shopping experiences, where consumers can digitally try on products and even purchase them through integrated apps within their glasses. The company has recently looked to press on with its intentions by acquiring 3D and AR commerce platform.

However, despite being a company with bold ambitions, Snap still isn’t profitable, despite growing its revenue annually by around 45% since going public. This rate of growth indicates that the company could find the space it needs to expand further into the AR ecosystem, but how much bigger can its share price realistically get?

Snap is rolling out some cutting-edge new technologies to incorporate into Snapchat. In late August, the platform introduced Scan, which has been positioned prominently alongside the app’s camera, helping it to identify a number of real-world items like clothes, products, and even certain animals.

The positioning of the function is significant as the platform attempts to move beyond that of a messaging app and into a more multifaceted technological hub. Scan acts as a visual search engine that’s capable of understanding what’s in its field of vision and offering insights and advice to help. It’s even possible for Scan to suggest various lenses based on what you’re pointing the camera at.

It’s worth noting that visual search is nothing new, after all, Google debuted Lens all the way back in 2017 – but the intelligence and volume of engagements packed into Snap’s Scan offering may give the platform a strong case for considering it as a market leader.

During Snap’s investor event earlier in 2021, the company anticipated that its revenue would grow by around 50% year-on-year over the coming years. The company anticipates an expansion of its self-service ads and higher-value video ads alongside it. The arrival of its AR lenses and in-app games – including more ‘social shopping’ experiences are anticipated to fuel such growth.

Snap is looking to incorporate a broad range of functions as a means of leveraging a diversified all-in-one ‘super app’ that’s capable of serving a far greater audience than its current user base of 293 million daily active users over the course of the decade.

At a rate of 50% growth year on year, Snapchat may be almost as valuable as Facebook by 2030 – provided that the social media giants continue at their own current growth rate of around 20% per year. However, as a direct rival in the augmented reality market, Facebook may also play a considerable role in arresting Snap’s AR-based growth as the decade continues.

While 50% annual growth sounds like a great way to reinvest in emerging technologies, there’s no guarantee that the company will be capable of maintaining this momentum – particularly in an emerging market with plenty of competitors – such as the aforementioned Facebook and other tech leaders like Apple and Google.

InvestorPlace argues that a ceiling may exist for Snap and that its price rallies may soon run out of steam as investors become put off by the cost and perceived lack of room for further growth.

Although three-fold growth over the course of 12 months is mightily impressive, Snap’s lack of profitability may need to be addressed before we can become more optimistic for the future – however, evidence suggests that the company may begin to turn profits sooner rather than later, at which point the sky could be the limit depending on how much of a share of the AR market the company can take from its wealthy rivals.

Despite some concerns surrounding the sustainability of Snap Inc’s impressive rally, Freedom Finance Europe has recently forecast a 34.2% yield on Snap’s stocks over the course of the coming three-to-six months – citing the company’s transformative role within the AR ecosystem as inspiration for the anticipated movement. Maxim Manturov, head of investment research at Freedom Finance Europe says “The real and virtual worlds are expected to merge over the next few decades. The metaverse is a term used to describe this phenomenon. Snap is likely to be one of the most successful companies as a result of this trend’s development. The company is making significant investments in Snap Cameras and Lenses, which are the primary building blocks for AR features. The platform’s development of AR features is expected to significantly contribute to expanding use cases and long-term growth. For the time being, augmented reality e-commerce is still in its infancy; according to a Bizrate Insights for Insider Intelligence survey, only 10% of US adults use AR for shopping, also 35% are interested. This indicates that there is still room for growth and that Snap can capture a sizable share of the AR market.”.

Snap’s come a long way from its relatively humble beginnings as a pictorial social network a decade ago. Now, with the company’s sights set firmly on the emerging augmented reality landscape and an upcoming race for market dominance alongside some resourceful competitors, it’s possible for Snap to use its impressive market performance to navigate the new ecosystem wisely.

For investors looking to buy into the company, the prospect of Snap delivering on its promise and establishing itself as the go-to AR eyewear firm may be enough cause for optimism. Although it has a long way to go before the company’s rubbing shoulders with Facebook, it’s certainly on the right track.