It’s not on the cards of every individual to be a guest at a royal wedding, but thankfully there are other ways to feel royalty in our lifetime. The wedding day is one such instance. All brides feel like princesses and no less in their weddings. The credit goes to the trousseau for sure, but there is one other thing that plays a significant role in making the dream come to reality, and that is your bling. 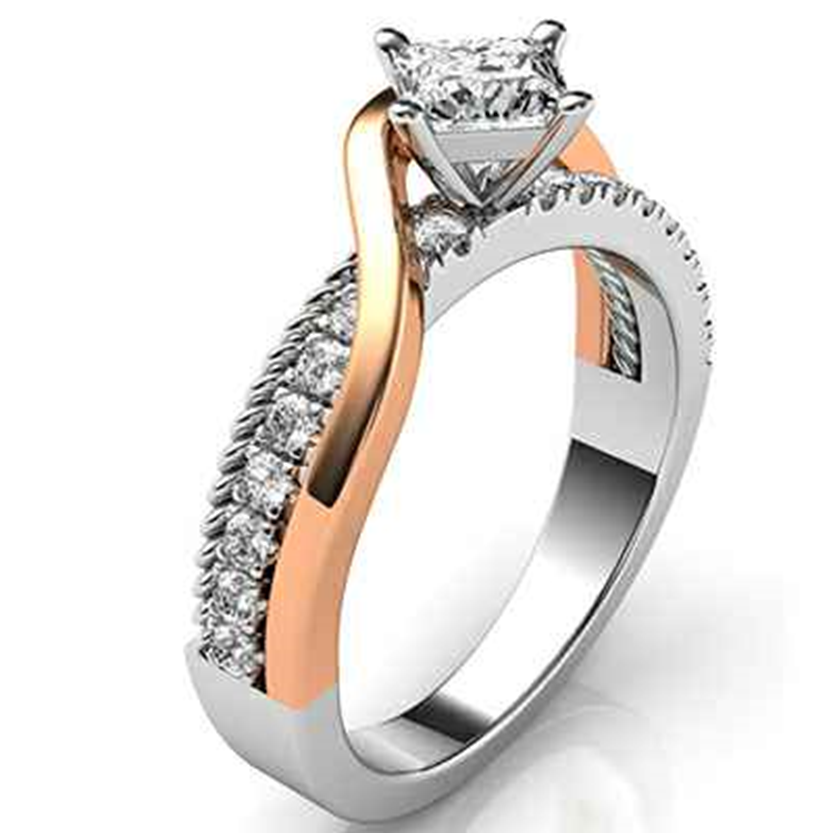 The tradition called the princess cut diamonds engagement ring has a history steeped in royalty and romance. It was back in the 1900s when the princess cut diamonds first came into the scene. Although princess cut as we know it today has evolved from its prototype, even the first-ever version out dazzled most of its predecessors at the time. Its biggest contender was the Old European cut which exists today in the shape of the round brilliant diamond cut. Other cuts that gave a run for their money are the old mine cut, rose cut, and single cut. Spurred by this new kid in the block, lapidaries and jewelers collaborated to modify the then version of the round brilliant diamond cut. They upped the ante by introducing more facets to the geometry that resulted in better light performance. Some new shapes fell out of those early experiments with diamond cutting. That explains why cuts like the oval were invented around the same time.

Back to the princess cut diamonds, more recently, a talented diamond cutter based out of Los Angeles decided to build a modern version of this early princess cut. After several trials, he created a diamond cut that came to us as the modern-day princess cut. This cut was, by definition, many times more brilliant than the square-cut diamond available to jewelers before. How he achieved this extraordinary sparkle is interesting. He combined the geometric shape of the early princess cut with the faceting of the round brilliant cut, and voila, a star was born.

Advantages of the Princess Cut Diamonds

The launch of the contemporary princess cut diamonds did not topple the round brilliant diamond cut from its topmost place, but it severely challenges its popularity claiming a large share of it, and why not? The princess not only looks amazing, it too has its own set of merits which makes it a tough contender to the world’s bestselling diamond cut, the round brilliant.

The first and foremost advantage of a princess cut is visual size. Between, rounds and the princess cut diamonds of the same carat weight, the latter appears bigger. Go for a shallow cut, and this illusion only gets better. Shallow cuts distribute the carat weight of a stone outward to make up for the lack of depth where the weight gets thrown downward. As a result, you get larger-looking stones.

The princess cut also offers a higher yield from the rough as opposed to the round cut. If you are not sure what that means, a princess diamond cut allows for less wastage. Being cut out of a rough crystal of diamond compared to a round brilliant diamond cut entails a lot of removal through chipping and cutting. That is what makes the princess cut slightly more affordable than the other cut.

Popular Styles in the Princess Cut Engagement Rings at Diamonds-USA

The primary advantage of the princess cut diamonds is that they look amazing with a host of ring styles. However, there are still some styles that do better justice to this incredible cut than others. One of those styles is the engraved scroll antique-inspired style. The curved hands and scrolls that are characteristic of these styles often spark up interesting and stunning contrast to the clean and sharp silhouette of the princess cut diamonds browse at Diamonds-USA.com.

Another style that creates a unique combination with the princess cut is botanical design. Intertwining vines, curling buds and leaves, and such detail provide a visually interesting background to this modern princess cut. Such designs create illusions of verdant foliage-covered walls that are reminiscences of stone wall castles and mansions. The Celtic design is another beautiful style that works magically for the princess cut diamonds. The looping knots, the hallmark of the Celtic designs create beautiful flair in the rings while the princess cut infuses the pieces with modern sensibilities that are key to the Irish heritage.

But what if you are a modern person who has eyes only for modern- minimal designs? Is the princess cut still an ideal diamond cut for you? Why of course. A modern diamond cut is meant to be paired with a modern design. So, if contemporary designs are your thing, by all means, go for it. Choose a smooth bezel or elevated prong setting, and you will have a dainty elegant ring.

The closest cut to the princess is the cushion. Both the stones have a squared center, but that aside, the two diamond cuts are vastly different. The cushion cut features soft edges, while the princess cut has sharp and neat lines. In that, the cushion cut is more akin to the old mind cut. The princess cut, on the contrary, possesses a modern contemporary, and bold look. The cherry on top with picking the princess cut diamonds is that it works mellifluously with other fancy shapes, the trillion, round pear being the top few choices.