DETECTIVES are probing the suspected murder of a dad of two after his body was found dumped outside the pub he ran with his wife.

Stevie Curran was discovered in a garden area at the back of The Dolphin Inn at Whitecraig near Musselburgh around 2am today (thurs). 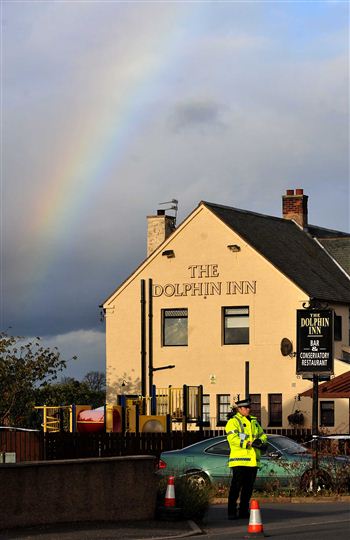 His body was found after officers called at the property while investigating a road traffic accident on the A1 some 20 miles away.

Road traffic police called to the incident found the vehicle empty, which after checks on the registered keeper, led them to The Dolphin Inn.

It was while there that the grim discovery of Mr Curran’s body was understood to have been made and CID called in.

A police cordon was immediately thrown up around the imposing property while the A1 was also closed for investigators to hunt for clues.

An appeal was then issued for anyone with information about the car’s movement’s before it collided, or who saw it being driven erratically at the Thistly Cross Roundabout or the Spott Roundabout, to contact them. 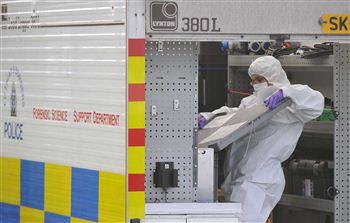 Police now also want to track down a man thought to be vital to their inquiry seen walking alone in countryside close to the scene near the Broxburn Estate near to where the crashed car was discovered.

Senior officers were unable to elaborate on the connection so early in the inquiry, but

Detective Inspector Stuart Hood leading the investigation said: “We are confident they are linked.”

He added: “We are still trying to piece together the circumstances surrounding both of these incidents.

“The first was about 12.30am and that was a single car collision on the A1.

“But the most significant event we dealt with was at 2am where the body of a male was found near to the Dolphin Inn in Whitecraig.

“The body was found in circumstances that we believe to be suspicious and in any event we now believe that we could very well be dealing with a murder inquiry.

“We are at quite an early stage and although we think the two incidents are linked, we have still not categorically shown that yet.” 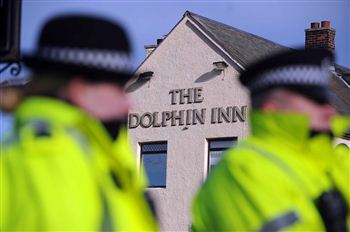 “We have a significant forensic team out dealing with this all to try and see what linkage there is between the two incidents and what significance the vehicle relays to the male that we found near the Dolphin Inn.

He said local people could provide the breakthrough needed to establish the exact circumstances of what had occurred.

DI Hood added: “We appeal to anyone who was in the Dolphin Inn last night or near to the Dolphin Inn to please come forward and contact us and give us any help they can in solving this crime.

“The pub was open last evening so anyone who was in there last night, whether they believe they are a witness to this crime, please come forward and contact Lothian and Borders Police.”

It was understood Mr Curran suffered “significant” injuries prior to being found lying in the open in the garden to the rear, seen by neighbours before a tent could be erected to preserve the scene.

The victim was understood to have lived in the flat above the pub which he had run for about two years with his wife Jill and their two children, one of who attended Musselburgh Grammar School. 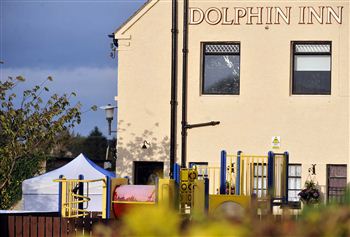 Together they had run a business under the name Middleton Leisure Limited where she was company secretary.

It was understood the pub was licensed by a larger company, said to be Caledonian Heritable, who yesterday refused to comment yesterday.

Neighbours confirmed the couple had been running the pub for the past few years and had been left shocked by the tragedy on their doorsteps.

Neighbour, Alan Brown, 49, said he could see Mr Curran’s body from his bedroom window after being alerted to the horror when the police came to his door.

He said: “There was no noise, no cars, no nothing. The first thing I knew was when the police were knocking on my door about 2amasking if we had heard any noise or any disturbance which we hadn’t.

“When I looked out of my upstairs bedroom window this morning I could see a body at the back of the Dolphin pub.

“It was a man in his late 40’s, I would guess. He had a black jacket, white shirt on and had got a fair amount of bruising on his face.”

“He and his family lived above the pub. He had two children one aged about 10 or 11 and one about late teens.”

“It’s a shame for the family.”

Another local resident, who did not want named, said: “The police came to my door at about 2am to see if I had heard anything but I had been up until 1.30pm and hadn’t – no screeching of tyres or anything like that.

“My back window overlooks the back of the pub and I saw the body lying between the main building and the garage.

“The face had a lot of cuts on it and it was fully dressed I think maybe he was run over.

“His wife drove a silver Toyota Celecia, which makes me think the police are right in saying the two incidents are linked.” 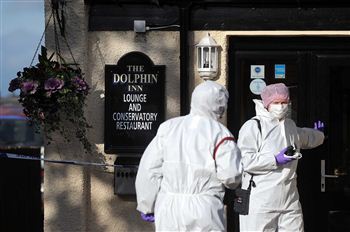 Another local added:”I used to see him in the mornings when I was taking my kids to school.

“I heard he used to be the licensee but had changed the name.

“It’s quite weird because no one really knows him, and he’s been there for two years.

“I believe he was a keen footballer back when he was younger.

“But anyone I’ve ever spoken to said he was nice enough, I really don’t know what would have brought this on.”

One regular who lives across from the pub said Mr Curran was hardly ever working.

He said: “I drink in there on a Tuesday night and it’s always really quiet.

“Stevie certainly didn’t work those nights when we were in, I think that’s why a lot of people didn’t really get to know him.

“But I think the family were originally from the west of Scotland.” 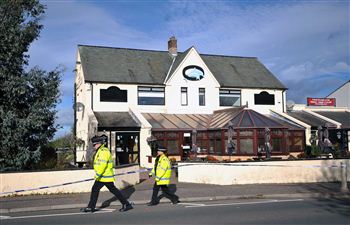 Mr Curran’s body remained at the scene this evening while forensic tests were carried out.

Four uniformed police officers were posted at the entrance to the building and it was unclear whether his family remained inside.

Police said the A1 re-opened around 1pm.