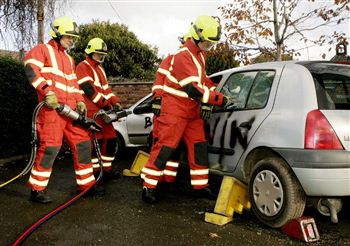 SCOTS fire-brigades are to be put on red-alert – kitted out in new Captain Scarlet style uniforms.

Bosses say the new suit is more suited to every day rescues than the heavy-weight gold suit which will now only be deployed for major incidents.

The new gear – which got an overwhelming thumbs up in live tests from staff – is lighter and more flexible, allowing for maximum movement.

But it is also flame retardant, and resistant to cuts, puncture and abrasions meaning there should be less call to replace them after incidents.

Lothian and Borders Fire and Rescue Service has become the first in Scotland to dress its 1100 fire-fighters with the new age kit.

The £250,000 investment there will be followed by other brigades when it is rolled out across the country by the end of next year.

John Dickie, head of operations at Lothian and Borders Fire and Rescue, said: “As the scope of the fire-fighter’s role has evolved, more and more of our work involves incidents other than attending fires in buildings.

“This new uniform can be used when attending road traffic collisions, urban search and rescue and grass fires.

“It’s lighter and more flexible, meaning that crews will have more freedom of movement when working.”

He added: “It’s designed specifically for fire work outwith buildings. It feels much lighter and it will reduce the heat stress that you can feel when wearing the gold uniform, particularly in the summer months.”

A brigade spokesman said they were confident the new suit would also help save lives.

They added: “We felt the gold uniform was not efficient for long periods of time and, in the long term, we will save money using the red suit because we will not have to replace the more expensive high maintenance gold outfit as often.

“If our fire-fighters can be more time efficient, this could contribute to saving more lives.”

The two piece suit is made from tear resistant fabrics and incorporates an inner Goretex liner which can be taken out to make it even lighter.

The jacket and trousers can also be zipped together to protect the wearer’s back for crawling in confined spaces.

Man rushed to hospital after chip pan fire in Pilton