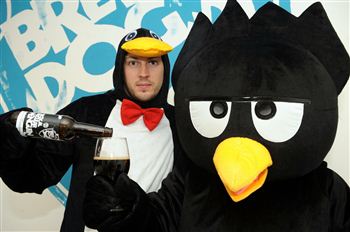 A CONTROVERSIAL Scots brewer has sparked outrage by offering free beer for life to anyone who gets their logo tattooed onto themselves at the opening of their first bar.

BrewDog, who have caused anger previously over the strength of some of their ales, are opening a pub in Aberdeen and are planning the promotional stun on the opening night,

James Watt, co-founder and managing director of BrewDog, said: “We’re going to have a tattoo artist in the pub on the opening night and we’re offering free beer for life to anyone who will have the BrewDog logo tattooed on their body.

“I think that we might get the tattoos ourselves – it only seems fair if we’re expecting other people to want to do the same.”

The Aberdeen branch – which will be called “The BrewDog Bar” is planned to open in mid-September of this year, and planning has been fully signed off and approved.

But the plan has caused outrage.

Acting Chair of the Aberdeen City Licensing Board, Councillor Bill Cormie, said: “We’re not currently aware of any promotion that would allow someone to have a lifetime’s supply of free beer in exchange for a tattoo.

“However, speaking personally, I don’t think that any licensing board would consider this promotion to be encouraging responsible drinking.

“We’re having enough difficulty as it is with enforcing the 72-hour promotions rule, and in terms of the law I would have thought that this offer would not be considered a responsible promotion.

“It’s one thing after another with these guys, it’s quite astounding.”

The Scottish Licensed Trade Association have already slammed the stunt as “abhorrent”.

Steve Mudie, president of the SLTA, said: “I would have to question whether such a stunt is entirely legal.

“The Licensing (Scotland) Act 2005 comes down very strongly on licensed premises that offer incentives to customers that may encourage them to act irresponsibly.

“Think about an 18-year-old going in there on opening night thinking it would be a great laugh to get a tattoo for free beer.

“He’s going to live for the next 60 years or so with this stupid tattoo, provided he doesn’t end up with health problems due to the amount of free alcohol he’s consumed.”

Responding to these remarks, Mr Watt said: “When Scotland’s licensing industry is going downhill, you might think that they would embrace something forward-thinking and innovative.

“Their comments smack a bit of naivety.”

BrewDog recently hit the headlines for producing the ?500-a-bottle End of History, which is 55 per cent proof ABV and served in animal skins.

The brewers also offer the 41 per cent Sink the Bismark beer, and the 9.2 per cent Hardcore IPA.

The firm is reportedly also on the hunt for a suitable location in Edinburgh following the planned opening of the Aberdeen venue.

Mr Watt added: “I think a site in the Old Town would suit our brand the most but we’re open-minded.

“We would be equally at home in the New Town or Leith.”

But a member of the Edinburgh’s licensing board also condemned BrewDog’s tattoo stunt in Aberdeen as “irresponsible” as said it would be taken into consideration for any opening in the capital,

Conservative councillor Jeremy Balfour said: “While I wouldn’t want to pre-judge a licensing application before it’s even come before the board, I wouldn’t think a gimmick like this would do it any favours.”