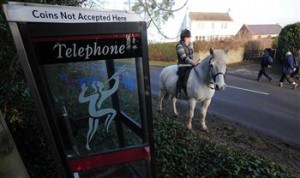 s in Scotland – one in 10 of the total – were completely unused last year.

British Telecom has agreed with Ofcom to maintain a public payphone network and cannot cut further without their agreement.

The area with the most unused phone boxes last year was Argyll and Bute, with 53.

The Highlands had 44 unused BT payphones, closely followed by the Western Isles region which had 40.

But as well as Glasgow and Edinburgh, other highly populated areas feature in the list. East Renfrewshire, Aberdeen, and East Dunbartonshire all boast an unused phone box.

She said: “It is an important duty of the regulator to ensure that basic telecommunications services remain within everyone’s reach, regardless of circumstance.

“For some people who don’t have any kind of phone of their own, phone boxes are a life line.

“For others they are useful if they find that their mobile phone isn’t working.

“BT has a duty to the Universal Services Obligation to provide a reasonable number of working phone boxes where they are most needed.”

Anna Steven, spokeswoman for BT, said: “The network has shrunk over many years as mobile phone use has escalated.

“We are constantly reviewing the payphone’s base and may seek to consult on further removals at some point in the future.”

She added: “BT will only remove a payphone if there is an alternative kiosk within 400 metres or where a local authority has approved a removal following consultation.”

BT has converted some of its unused phone boxes into “cashless facilities”.

She said: “This means people can make free emergency calls from them – or pay for calls using a card – which reduces maintenance costs including theft and vandalism.”

Scotland has possibly the most famous phone box in the world, the classic red box that featured in the 1983 hit movie Local Hero.

The kiosk in Pennan, Banffshire, is a listed building, and the most-called phone box in the country, as tourists come from all over the world to re-enact scenes from the movie.

But even this celebrated phone box takes in hardly any cash and most visitors use their mobiles to ask friends to call the number.

He said: “Not everyone has a fully charged mobile phone at all times, and the local call box remains a lifeline service.”

He said: “I feel the slow decline of the traditional telephone box represents a loss in British identity.

“They are synonymous with our country in the same way yellow cabs are in New York City.

“I understand people are using mobile phones more but the phone boxes should be protected for use in emergency situations.”

Scottish university to team up with BT for 5G project