Livingston striker Liam Buchanan has urged the Lions to make the most of their second chance in the Irn Bru Cup at Crusaders after fearing they would be thrown out of the competition.

The West Lothian outfit were found guilty of fielding the suspended Alan Lithgow in their 2-1 victory over the Northern Irish side at Seaview on October 7 but the SPFL ordered a rematch instead of expelling the club.

Ironically, defender Lithgow will be available for the clash and Buchanan is determined not to let this opportunity pass them by, with Welsh champions The New Saints awaiting the winners in the quarter-finals. 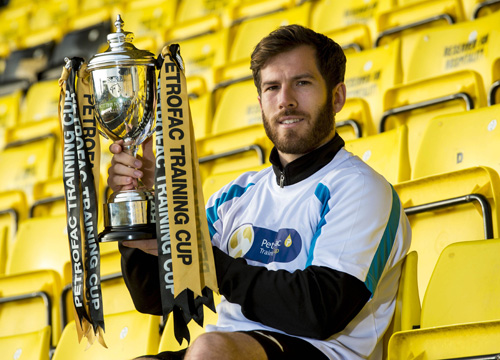 The experienced marksman, who scored the opening goal in the first game before Scott Pittman notched an last-gasp winner, said: “There is a bit of a relief there that we’re still in the competition and we can’t be too despondent that we have to go over there again.

“It was an admin error somewhere but I think the punishment was fitting. Although, I think the boys probably thought that we would be thrown out of the competition.

“As players it had nothing to do with us and we thought that would have been an injustice given the effort we put into the first game. We scored a 95th minute winner and with all the emotion that was associated with that, it would have been disappointing for that to have gone to waste.

“We now need to go over there and put on another professional performance. We had a good look at them in the first game and they’re obviously a good side, so we will have to be excellent on the night.”

Livingston will set off on a 7am flight from Glasgow airport on Tuesday morning before flying back to Scotland on Wednesday and manager David Hopkin hopes the travel will not be an issue.

He added: “Our travel arrangements are similar to what we had in the first game. We’re heading off from Glasgow early in the morning but we’ll go to the hotel to catch up on some sleep and get something to eat before the game.

“We have the SPFL to thank in terms of the punishment they handed out because it means we still have a chance to progress.”

More IRN-BRU Cup controversy as James McDonaugh describes evening kick-off for Edinburgh City’s semi-final in Wales as ‘a disaster’ & reveals his players will...