That is until Angel (Jack Gore), who prefers to be called Bill, Erasmus’ unknown grandson, shows up after his father Beau (Jake McDorman), is banged up for taking coke and assaulting a prostitute.

The disturbed pre-teen, makes his entrance at a lavish dinner party with a plastic bag, a Bible and some cash, after his father shoves him out of a window while police bay at his door. With only his grandfather’s address and a gut full of guile, Bill soon breaks up the party and makes his presence felt with his new, unlikely guardians. He then unwittingly proceeds to shine a light on the irresponsible couple and their unwillingness to grow up.

Described as ‘feral’ by Paul, who produces shows for his lover, a celebrity chef on a television food programme in Santa Fe, the boy is difficult to engage, treated to excess and allowed to do as he pleases. The situation sparks hilarity: “We’re locking our doors, that kid scares the shit out of me,” says the filmmaker. And watching the pre-teen gnaw at Erasmus’ gourmet tastes with insistence on a daily trip to Taco Bell is a hoot.

Bill clearly tries the already fragile bond between the men flagged up early in the script by Paul, when he described why he stays with his rather pompous British partner: “Part of me just wants to stick around to watch him die,” and remarks on his fey ways as he rides a horse through a ranch to promote Mexican food as: “Like Butch Cassidy without the butch.”

The couple’s endless sarcastic bickering has a lightness, honesty and deft touch. It is never overplayed. Director, Andrew Fleming, (The Craft/Dick/Nancy Drew), knows not to over-egg the comedic pudding and Coogan and Rudd are such veterans at timing, they know when enough is enough.

Their flame-haired, stubborn ward is also ballast for any chance that they might steal the show. The confident young actor plays adolescent defiance naturally, and a clear script that describes how he has been bounced around by dysfunctional adults affords him viewer empathy.

A visit from a child protection officer, who discovers that the child’s screen time might have exposed him to some of the couple’s adult video collection, sobers up his carers and when faced with Bill being taken from them, they begin to realise what a difference he has made to their lives.

The not totally new story premise clearly has the opportunity to turn cloying. But the streetwise kid isn’t for sentiment. Instead, it is his party-loving new family members that begin to melt. Erasmus even describes one forced sojourn to Taco Bell with the obstinate boy, where he is forced to share food as one of the most beautiful experiences of his life.

When Erasmus’ son finds God and gets leave from prison and the custody of his boy to start a new life in Arizona, his gay guardians are bereft and their relationship begins to founder. But something beautiful prevails to give them a second chance of bonding as a family.

Coogan and Rudd are at their comic best and the film has a lulling equilibrium. It would be easy to veer so heavily into farce that it’s charming emotional content shatters.  But Fleming eschews this trap and humour, honest feelings and ultimately, humility, lift it to glory.

Beyond this it –  by close of play – extols the win/win virtues of same-sex parenting, eroding any diversity issues for this generation and those to come.

Ideal Home made its European premiere at the Edinburgh International Film Festival. It is released in July 2018. 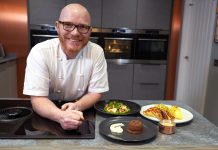