SUSAN Boyle showed she thinks Britain’s got political talent by taking part in the nation’s very own X-Factor contest at the polls.

But the West Lothian superstar was keeping-tight lipped about which party won her vote at Our Lady of Lourdes Primary School in Blackburn. 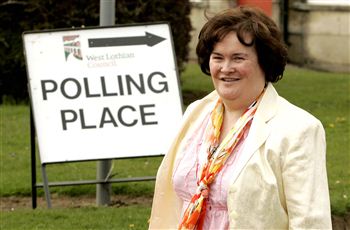 Mentor Simon Cowell, of course, came out in support of the Tories earlier in the week but Susan said: “Yes, I’ve voted – but I’m not telling you who!”

Before heading for the polls SuBo stopped off to discuss matters of state at her local hair salon.

Maybe she was thinking about starting her very own fringe party.