Captain Antonio Arbilli was to have taken the helm of Scotland’s only ferry route to Europe last May.

But the 44-year-old Italian seaman suffered a blockage to his heart only minutes before setting sail from Zebrugge in Belgium for Rosyth where a host of VIPs and dignitaries were waiting to greet the maiden voyage. 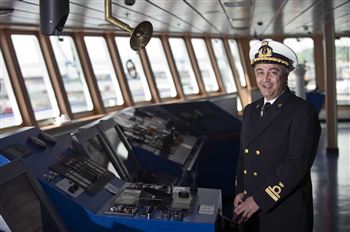 Surgeons performed life-saving surgery on the skipper, and a ship-shape Captain Arbrilli was finally handed the honour of commanding the vessel into port to mark celebrations to mark the first anniversary of the service today.

He said: “No one was more disappointed than me that I could not take part in the maiden sailing last year.”

“But bringing the ship in today was my moment of glory. You know this is like a new birthday for me so now I can celebrate twice.

“It’s such an honour to travel this route.

“I always enjoy travelling to Scotland as the passengers are always so friendly and tell me how much they enjoy the ferry.

“It was a big disappointment not being able to travel the first time but I was very pleased to be able to be involved today for the first anniversary.

First Minister Alex Salmond – who was to have greeted the captain first time around – said he was delighted to learn he had fully recovered and heaped praise on the ferry operation itself.

He said: “I’m particularly glad that Captain Arbilli, who missed out through illness on the Scottish Viking’s maiden voyage last year, has been able take the helm this time around.”

“I was delighted to welcome the first passengers to Scotland last year and pleased to support the first anniversary of this important international ferry service direct to the continent.” 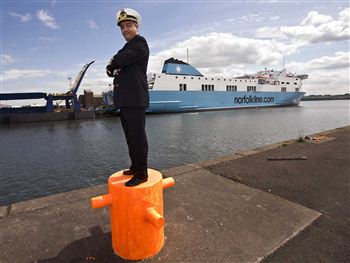 “It’s value was highlighted during the recent travel disruption caused by the volcanic ash cloud, with Norfolkline making extra space available and hundreds of additional travellers using the ferry as an alternative means to get home.”

Chris Newey, Norfolkline’s general manager on the route, admitted that recent problems with air travel had been a real boost to the route.

He said: “There is a tremendous sense of goodwill and pride in Scotland about the ferry – we often hear people refer to the Scottish Viking as ‘our boat’.

“The route gives Scottish passengers a leisurely and stress-less overnight crossing to and from Europe without having to worry if their plane can or cannot fly because of the volcanic ash cloud.”

The celebrations were the first in a series of events the company is looking to stage in order to drive up numbers on what is now Scotland’s only ferry route direct to mainland Europe.

Charles Hammond, Group Chief Executive, Forth Ports PLC, said: “I am delighted we are celebrating the one year anniversary of Scotland’s only ferry crossing to Europe.

“It continues to be an excellent testament to the economic rewards that can be achieved when the public and private sectors come together in partnership.”

Chairman of VisitScotland Dr Mike Cantlay, said the tourism body was working hard to encourage more people into using the route, and was pleased to see the original skipper taking the helm at last.

He added: “I am delighted to see that Captain Arbilli has made a full recovery and that he is on board to mark this very special occasion.”

“We would like to congratulate Norfolkline on the first anniversary of this important service.”

* FOR more information about the Rosyth-Zebrugge ferry route, click here.