Livingston prosthetics company is business of the year 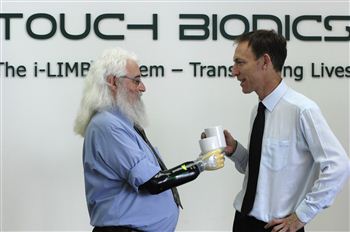 A SCOTTISH prosthetics company has been named the most innovative company in Europe at this year’s International Business Awards.

Touch Bionics, based in Livingston, beat off competition from more than 1,700 entries across 40 nations to take the global award.

The company, which develops upper-limb prosthetics, was assessed on its progress over the past year, including the launch of a ProDigits partial hand solution and a new prosthetic hand device, the i-LIMB Pulse.

Stuart Mead, chief executive officer of Touch Bionics, said: “Winning an International Business Award is a demonstration of Touch Bionics’ outstanding innovation and business success over the past year, and to win ahead of some of the biggest names in global business is a tremendous achievement.

“Innovation is at the core of this company and, from the launch of our first product, the i-LIMB Hand; we have never stopped innovating to ensure we continue to lead the world in the field of commercial bionic technology.”

The awards, which have been nicknamed the ‘Stevies’ – coming from the Greek work for “crowned” – will be dished out at a ceremony in September at the Ritz-Carlton Hotel in Istanbul, Turkey.

The West Lothian company topped major brands like H&M and Nestle, who have been recognised as distinguished honourees.

Michael Gallagher, president of the Stevie Awards, said he would like to send his congratulations to all of the finalists and looks forward to presenting winners with their awards later this year.

The awards are split into four sections, and there are also prizes for the American Business Awards, Women in Business, and for Sales and Customer Service.