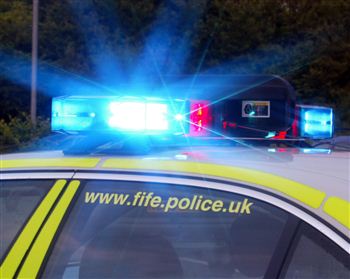 A female driver of a Ford Focus and the driver and passenger of a Citroen Xantia had to be freed by fire crews when their vehicles crashed shortly before 12.30pm on the A912, near Easter Cash Farm in Cupar.

Two children traveling in the Ford Focus managed to free themselves before emergency services arrived, and sustained only minor injuries.

The female driver is thought to have leg injuries, and was taken by ambulance to Ninewells Hospital in Dundee, along with the other two adults involved in the accident – the extent of their injuries were not yet known.

The road remained closed between Falkland and Strathmiglo Road, while the council was called in to cover an oil spillage with sand.

A spokeswoman for Fife Fire and Rescue said: “Two crews were called to a serious road traffic collision at around 1pm, where three adults were trapped in two vehicles.

“Two children were also in one of the cars, but had managed to get themselves out before we arrived at the scene, and did not appear to be badly injuried.

“All five involved were taken to Ninewells Hospital to be checked over, and we do not yet know the extent of their injuries

“We were called to the scene by police.”

A Fife Police spokesman confirmed: “A female driver of a Ford Focus was taken to hospital with suspected leg injuries, and a driver and passenger of a Citroen Xantia were also hurt and taken away in an ambulance to the same hospital.

“We got the call when a member of the public raised the alarm at 12.20pm, and we are now working to find out what caused the accident.

“The road is remaining closed while the council ensures its safety after oil was spilled during the collision.”