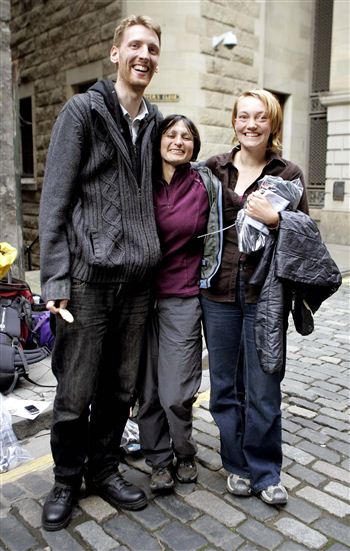 By Martin Graham and Amanda MacMillan

FIVE people accused or being involved in a series of eco protests against the Royal Bank of Scotland appeared in court today (Tues).

They were part of the Climate Camp group which set up a temporary village beside the RBS headquarters at Gogarburn and alleged to have launched a series of protests against businesses in Edinburgh on Monday.

None gave addresses in Scotland.

Giovanni Specials, 38, and Tim Gee, 25, both from London, and Cara Whelan, 34 from Ceredigion in Wales, were charged with breach of the peace in relation to a protest at the RBS branch at Nicolson Street.

They were accused of stopping customers from entering the bank, chanting slogans and gluing themselves together in an attempt to block access to the bank.

They all denied the charges.

Martin John Wallace, 58, from France, was detained as he tried to leave the Gogarburn site on Monday morning and charged with assaulting a police sergeant and rubbing nettles against a police officer’s arm.

He pleaded not guilty.

Eleanor Smith, 24, also from London, denied charges of damaging property and graffiti-ing bins belonging to the bank on the Royal Mile.

Procurator fiscal Dev Kapadia initially wanted to impose bail terms which would force the protesters to leave Edinburgh within two hours and not return unless they had a scheduled appointment with their solicitor.

They would also have been forbidden to return to the campsite at Gogarburn.

Sheriff Maciver called for a 15 minute break while the defence lawyer Clare Ryan and the PF sorted out the terms of the bail undertakings.

They resumed and agreed that the bail conditions would be that those charged would leave Edinburgh by 7pm last night, not return to the city centre unless for a court appointment or meeting with their solicitor, and not approach within 500 yards of the RBS premises at Gogarburn. 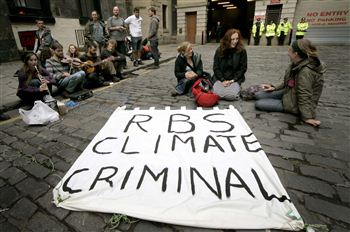 The protesters were joined in court by supporters who had brought their belongings along to save them having to return to the campsite at Gogarburn.

As they emerged from the back of the court the bailed protesters were met by friends and supporters who greeted them with hugs and updates on what had been happening while they were in custody.

At the camp site yesterday, other protesters spent the day folding up their tents and picking up their rubbish before leaving the £335 million complex at Gogarburn which still had a heavy police presence.

As they left through the muddy grass with their hoods up and woolly hats on somed even stopped to ask police for directions.

A police spokesperson said: “Police are hoping to maintain a presence at Gogarburn until all of the campers leave but it is expected that they will be there until tomorrow.”

Some staff at RBS HQ stayed away from the building while the protestors made their exit.