EDINBURGH’S Haymarket train station is to undergo a multi-million pound revamp, creating a hub for the city’s train and tram network – and increasing efficiency between the country’s two biggest cities.

The plan is part of a £1 billion improvement to rail links in central Scotland, which will cut journey times between the capital and Glasgow down to just 35 minutes.

Costing somewhere in the region of £50m-£100m, the station will be keep its original two-storey form, but a new black granite facade will be added, as well as a copper-clad concourse.

And – in anticipation of a rise in passenger numbers – 12 more ticket gates will be added to the concourse, which will be connected to the platforms by a glass link bridge and new glass lifts.

Rail bosses believe these measures will ensure Haymarket is able to cope with what they believe will be a 50 per cent increase in demand by 2022.

The plans have been lodged with the City of Edinburgh Council and details of the work first came to light in the Scottish Government’s Strategic Transport Projects Review (STPR), published in 2008. 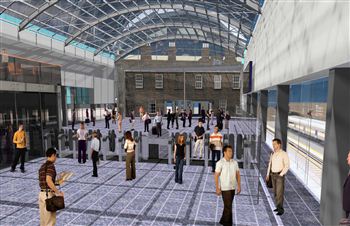 The line between Glasgow and Edinburgh is to be electrified, and work is already underway – with six trains per hour expected between Waverly and Queen Street stations – and three more an hour between Edinburgh and Glasgow Central.

“We are currently working with First ScotRail and Network Rail on the design and development of the proposals to provide improved passenger access and amenities at the station.”

In the planning application – submitted to the council on Tuesday – the redevelopment is described as a “transport interchange hub”, providing connections between the rail network and buses and trams.

A spokesman for Network Rail said: “Haymarket station is a major transport hub with more than four million passengers a year passing through it.

“Passenger numbers are expected to reach nine million by 2030 and Haymarket needs to be capable of supporting this growth.”

A spokesman for the tram project said: “Haymarket will be one of our key interchange points on the route, providing a seamless transition between train and tram.”