THE POPE arrived in Scotland to be greeted by an adoring crowd of some 125,000 people in glorious Edinburgh sunshine on his first State Visit to Britain today.

It dwarfed protests from less than 100 or so people after flashpoints failed to materialise and mar what turned out to be huge success for the city with coverage of the historic visit beamed to a worldwide audience of around a BILLION people.

One lucky schoolboy found himself being hugged by his Holiness Pope Benedict XVI in an impromptu walkabout in Morningside before lunch, while others revelled in being able to grab just a fleeting glimpse of the Catholic leader.

But in his first speech of the four-day UK wide visit, Pope Benedict XVI made it clear that he wanted to extend “the hand of friendship” to everyone gathered.

The plane carrying His Holy Father – call-sign Shepherd One – left Rome at 7.20am before landing at Edinburgh Airport bang on 10.16am.

As it taxied from the runway a Union Jack and Vatican flag were flown from its cockpit as it was then slowly guided towards the recently refurbished main airport terminal.

Airport workers and members of the public joined waiting media craning their necks for a glimpse of the leader of the Catholic Church as excitement mounted.

The Duke of Edinburgh, who arrived shortly before the plane touched down, waited with Cardinal Keith O’Brien as the Pope emerged at 10.34am.

Prince Phillip laid a discreet hand at the back of his Holiness to keep his robes from flying up the gusty wind, but even he failed to stop it whipping over the Pope’s head at one point.

Kilted soldiers from the Royal Regiment of Scotland – made up of the Royal Scottish Borderers, the Black Watch and the 52 Lowland Regiment – were lined up in salute forming a guard of honour as he emerged from the plane.

Plans for a red carpet on the tarmac were abandoned because of the high winds after a test run the day before saw it flaying around in the gales.

The greeting party then entered a 17 strong convoy of cars flanked by police outriders which was whisked through the airport grounds, onto the A8, towards the city centre.

A red carpet, staff in top and tails and a band from the Royal Regiment on Scotland in place along with some 400 guests at Holyroodhouse where the Queen was ready to greet their VIP visitor as crowds gathered outside the palace gates.

At 11.06 the Pope arrived at the palace where Her Majesty, dressed in grey and wearing black gloves, shook hands with the Holy Father.

The Royal Regiment of Scotland played the national anthems before the Queen led the Pope towards the greeting line, starting with Edinburgh Provost George Grubb.

There was a mild panic when it emerged the head of the Church of Scotland was left out of the official welcoming party by what was put down to a “procedural mix up”.

Cardinal Keith’O’Brien and Mr Salmond later arranged a hasty meet and greet inside the Palace sparing any further embarrassment.

In opening speeches, the Queen wished the Pope a “most fruitful and memorable” visit while he listed a number of people in his thanks including the Duke of Edinburgh.

Moments later they repaired inside the great house, followed by other invited guests.

Greeted by a battery of pool photographers, the Queen also presented the Pope with a gift of facsimilie drawings from the Royal Collection, while he in turn presented her with a rare manuscript.

The Codex Aureus of Lorsch, a gospel book from the Pope’s native Germany, was ripped in two during historic divisions between Roman Catholics and Protestants, but the Queen was given a facsimilie copy of the entire works.

They were left alone in the Morning Drawing Room to continue their talks in relative private, but broad smiles across the Pope’s face suggested that he was thoroughly enjoying his first trip to Scotland.

As they exchange pleasantries, the St Ninian’s Day Parade began on Princes Street, with thousands gathered waving mini Saltire flags and marching in the shadow of the castle.

Bands strode proudly down the famous shopping street, with a helicopter buzzing overhead and proud parents and grandparents looking out for relatives.

His Holiness left the palace in the Popemobile – registration SCV 1 – to begin his journey up from the Old Town into the city which saw tens of thousands lined the streets.

Cardinal Keith O’Brien made sure all those in the bullet-proof vehicle – including the Pope – were sporting the specially commissioned Papal tartan which had adorned many of the guests at Holyroodhouse earlier.

Children in school uniforms and costumes cheered, 1000 pipers played Highland Cathedral while others climbed atop park benches, bins and even bus stops to try and catch a glimpse.

His motorcade sparked something of a carnival atmosphere as it crawled along the city’s most famous street, a dozen or so bodyguards running alongside.

Around the same time the Reverend Ian Paisley arrived in the city’s Grassmarket where he was top lead protests against the visit.

He said: “We are here for a very solemn and serious reason today, the whole day is nonsense.

A second group staged a static protest in the Lothian Road, waving placards and blowing a vuvuzela , but drowned out by 1000 pipers playing Highland Cathedral.

However they did get to show their posters over child sex abuse in the church and subsequent claims of cover ups as he sped by.

Elaine Doherty, 30, a law student from Battlefield in Glasgow, said: “I think that the protest went well.

“We were all respectful, and I definitely feel a sense of achievement .

“I saw him read our sign as well – I’m certain he focused on it for a second before turning away in disgust.

By lunchtime police said no arrest had been made.

Locals and tourists alike spoke of it being a day they’d never forget as he blessed the crowds on his way to lunch at Cardinal House in Morningside, said to consist of a haggis starter.

Before entering the impressive sandstone building, the Pope broke with his itinerary to go walkabout much to the delight of waiting schoolchildren.

One young boy – in a blue and white striped t-shirt – was embraced in a Papal hug while others took photographs and held outstretched hands, desperate for any glancing touch.

The Pope emerged at 3.52pm and entered a waiting black BMW car to continuing his journey west along the M8 to Glasgow where he was ending his day by celebrating a Mass at Bellahoustoun Park.

He was then to fly to London on a two-day visit before moving onto Birmingham.

A worldwide audience of one billion was expected to watch his historic visit to Scotland. 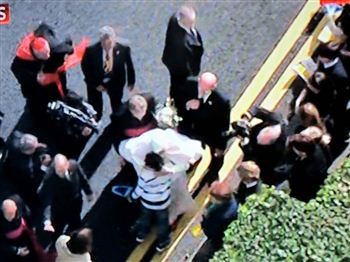