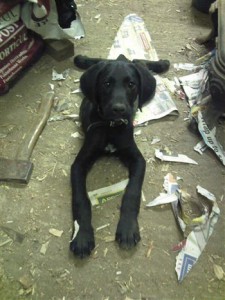 A LUCKY pooch who survived a 250ft free fall after leaping off a cliff into mid-air is awaiting an emergency operation to save his life.

Two-year-old German Pointer Rover was on his way back from a trip in Northern Ireland with owners Roxanne Peggie, 23, and Barry Blyther, 43, when they stopped their car to get some fresh air.

Whilst walking around at the Benevenagh viewing point over Lough Foyle near Limavady on Friday afternoon, an over-excited Rover refused to stop running as he reached a low wall at the cliff’s edge.

Ms Peggie, an eagle falconer from Kirkcaldy, said: “Our other dog Rudy had gone close to the edge but we screamed at her to come back.

“However, Rover is a bold dog, and he just followed his friend, but made no attempt to stop on the wall, he bounded over.

“When he went over it was horrific, he fell down the cliff through thin air – he didn’t hit rocks or anything, it was just a complete free fall.”

At this point Ms Peggie’s boyfriend, Mr Blyther made the daring decision to go down the rock face after the dog, by using an alternative descent down the hill.

He said: “Roxanne was closest, and looked over to see her dog’s head and front feet just hanging onto a foot wide ledge, scrabbling to get back.

“In the same instant, he fell. He was out of sight for a few seconds as the drop is sheer.

“We heard him scream as he hit, then he came back into sight as he further tumbled through the sloping rocks below.

“We later measured the distances with an altimeter. His free fall was more than 250ft and the further tumble was another 180ft.

“I managed to get to the dog after a fran

“He was still alive but I was unable to move him.

“His screams were blood curdling and the terrain is of the harshest rock type you can imagine.

“I had no choice but to leave him and get together with Roxanne and the others to mount a rescue – as I was unable to rescue him alone.

“I put a coat over him to keep him warm and my heart was torn first by the decision to leave him, then again as twice as I started to pick a route out he tried to follow.”

The dog fell at around 4.15pm and Ms Peggy, Mr Blyther and three friends returned at around 9pm, to a spot closer to the dog around a mile and a half away, with a rescue mission in mind.

Mr Blyther said: “When we got back he had moved about 10ft and my heart sank as I didn’t see him instantly.

“He had moved in between two large rocks covered in a bush and when he saw us his eyes lit up and his tail was wagging, but he was still unable to stand or walk.”

The group of five fashioned a stretcher out of two coats, a hoover pole and a length of twine and managed to get Rover to their car at around midnight. 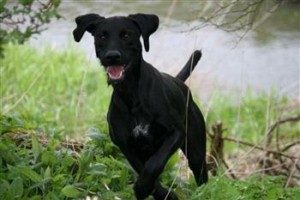 They took him to an emergency vet who found he had no broken bones, but did have one crushed vertebra in his back.

The following morning the couple got their dog back to Scotland by ferry and took him to their own vet.

The bad news continued – on closer inspection it appeared that the dog had a second damaged vertebra, this one more serious, appearing to be fractured, requiring neurological specialist care and surgery which could cost up to £12,000.

Mr Blyther said: “Without an emergency operation Rover will not walk again and the only option will be to put him to sleep.

“But Roxanne and I do not have that kind of money at our disposal, it is tragic.

“After all he has defeated, it seems so unfair that he may die because of a vet’s bill.”

Rover’s vet in Glasgow confirmed that the operation would give him the best chance of a full recovery.

Ms Peggie and Mr Blyther are now appealing for help with their fundraising campaign; anyone who can help should contact [email protected]