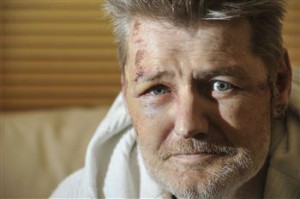 A MAN had to have 48 stitches after he was beaten and repeatedly slashed on the face for refusing to hand over a cigarette.

Robert Grant, 51, was attacked in broad daylight outside a church in Edinburgh – while a service was going on.

Two schoolboys have been charged with attempted murder following the assault, which has left Mr Grant requiring plastic surgery on his face.

The father-of-four was stabbed in the back, and suffered a broken nose and cheekbone, as well as being left with a footprint on his cheek from where he was stamped on.

Doctors at the Royal Infirmary of Edinburgh told him the stab wound in his back had narrowly missed his spleen by just a quarter of an inch – and if it had ruptured an organ he could very well have bled to death.

Mr Grant had been walking home from a bookmaker at around 5pm on Sunday, when he was attacked outside the Holy Trinity Church in the Wester Hailes area of the city.

He said was asked for a cigarette but replied that he did not have any left.

Mr Grant said: “The next thing I knew, I felt a sharp pain in my back and I fell to the ground.

“I can’t remember anything else so I think I must have passed out.

“I’m told someone who had been in a service at the church came out and found me and called for an ambulance.” 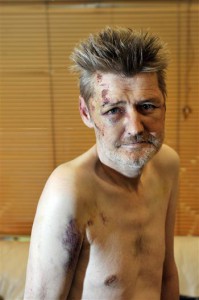 He was rushed to hospital and underwent a CAT scan to check for head injuries and received 48 stitches to his wounds.

Mr Grant added: “I’ve been given a lot of painkillers to take, especially for the pain to my back, which is really bad.

“I think I’m lucky to be alive but I’m still really shocked that this could happen to me.”

Police confirmed that two 15-year-old boys had been charged with attempted murder in connection with the incident.

Mr Grant has decided to stay with his eldest son Robert, who is a live-in manager at a bed and breakfast in Polwarth, as he said he is too scared to go back to his home in Wester Hailes.

Robert, 26, said: “My brother Steven had been living with dad in Wester Hailes and was worried when he didn’t come home.

“That’s totally out of character for my dad so Steven called round the family looking for him.

“On Monday morning we were really worried and started phoning round the hospitals thinking he may have had an accident.

“That’s when we found out he was at the ERI.

“A nurse managed to put him on the phone.

“He was crying and told us he had been attacked and stabbed.

“It’s horrendous what has happened to him.

“My dad is not the kind of person to get into bother with anyone.”

A police spokeswoman said: “Two 15-year-old boys have been charged in connection with an alleged attempted murder in Hailesland Place, Edinburgh, on Sunday.

“A report has been sent to the procurator fiscal.”