MUSSELBURGH Racecourse kicks off its Flat season tomorrow (Saturday) with a two day Easter Festival of Racing featuring the new £50,000 Betfred Royal Mile Handicap and offering more than £150,000 in prize money over the weekend.

The lure of a £50,000 race on Easter Saturday with the inaugural running of the Royal Mile Handicap has attracted a maximum field of quality three year olds from training centres as far apart as North Yorkshire, Newmarket and Lambourn.

Middleham-based Mark Johnston entered seven runners at the five-day stage and relies on last year’s useful juvenile Cravat and the progressive Switzerland who will be fit from a campaign on the all-weather. 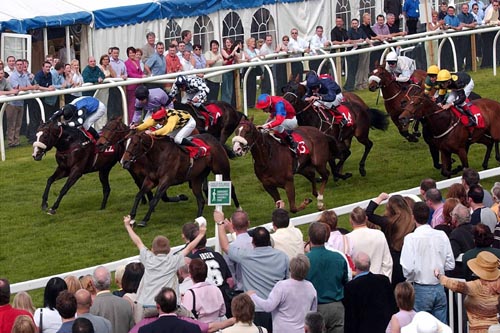 Pick of the Newmarket contingent should be the filly Shabora, trained by Roger Varian and the mount of Neil Callan. Shabora has won over ten furlongs on the polytrack at Lingfield and last time out over a mile at the same venue proved too smart for Switzerland.

The form horse is Bronze Angel who is a rare raider from the Lambourn stable of Marcus Tregoning. Bronze Angel scored over a mile at Lingfield back in mid-January with Shabora behind him in third place.

The son of Dark Angel is better off at the weights tomorrow and after his Lingfield success, Marcus Tregoning said: “This is a big improving colt with plenty of scope. I intend to keep him for the turf season.”

The bonus for Musselburgh racegoers is that the charismatic Hayley Turner will be in the saddle on Bronze Angel. Britain’s outstanding female jockey with two Group 1 victories to her name last summer, Turner has been in great form on the all-weather and had no problem guiding Bronze Angel to his cosy win at Lingfield.

Channel 4 cameras will be covering the Betfred Royal Mile handicap at 3.50 and will also be taking pictures from the Betfred Whistlejacket Conditions Stakes at 2.45. This £20,000 five furlong sprint sees course specialist Hamish McGonagall bidding to repeat his win in the corresponding event last year and he will brush up against another previous winner of this race, Borderlescott.

Tim Easterby also saddles his dashing front runner Captain Dunne and with both Bryan Smart’s Excel Bolt and Tom Dascombe’s Bear Behind in the line up, an exciting finish is guaranteed.

Musselburgh’s general manager Bill Farnsworth is delighted with the quality on show at the East Lothian track’s first flat meeting of the season.

He said: “Entries for the Royal Mile Handicap, which is a Class 2 race for three year olds rated 0-100, is excellent and we are all set fair for a great weekend Festival of Racing.

“In the Conditions Stake we also have two previous winners and both have a loyal following at Musselburgh.This should be a big draw for our regulars and if Hamish McGonagall or Borderlescott wins, we will name the race after it next year.”

Musselburgh has advised that race times for both weekend meetings have changed to accommodate television coverage and first race at East Lothian on Saturday is now 2.10pm and on Easter Sunday 2.20pm, with gates opening at 11.30am on both days.

Easter Sunday is Musselburgh’s largest family day event of the year and the £20,000 Musselburgh Gold Cup is the headline attraction, vying for attention against a host of free family entertainment and attractions, including children’s favourite Peppa Pig.