GEOLOGISTS at the University of Glasgow, University of East Anglia (UEA) and the British Geological Survey in Edinburgh have developed an advanced rock-dating technique in order to help residents of the remote island Tristan da Cunha make better plans for evacuation in the case of volcanic eruption.

Tristan da Cunha, a British overseas territory which is located in the South Atlantic Ocean more than 2800 kilometres from its nearest city, Cape Town, South Africa.

It forms the tip of a subaquatic volcano with a land mass of 78 kilometres and it is home to the most remote community in the world, with all 261 residents living in the island’s only village, Edinburgh of the Seven Seas. 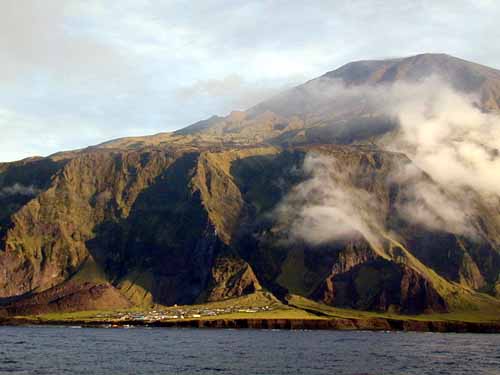 William Glass, originally from Kelso, founded the community in 1817 and became the island’s first permanent resident. His idea of the ‘ideal’ community where everything was shared attracted other settlers, despite the isolation and tough weather conditions.

A volcanic eruption in 1961 led to the total evacuation of the island with residents rehomed in temporary accommodation on the British mainland. However, most families chose to return to their island homes in 1963.

Worryingly, the volcano is still active and in 2004 an undersea eruption led to volcanic material being washed up on the island’s shores.

A recent article in the publication Geology details how a technique known as argon-argon dating has allowed the islanders to understand the past activity of the volcano more fully and as a result, develop contingency plans in the event of another eruption.

Dr Darren Mark, of the University of Glasgow at the Scottish Universities Environmental Research Centre (SUERC), said: “Determining exactly when eruptions happened on Tristan da Cunha in the past and how frequently they occurred gives us vital information we can use to help the islanders plan for the future.

“Argon-argon dating gives us a way to use volcanic rock from the island as a very slow clock which can tell us how long ago eruptions occurred. By examining rock samples in a mass spectrometer, we can measure its ratio of radioactive potassium to argon, its decay product. We know that the half-life of this decay process is 1.25 billion years, so basically the older a rock is, the more argon we’ll find.

“We dated 15 new samples taken from across the island from as long ago as around 118,000 years to as recently as 3,000 years and we have found that eruptions are much more frequent and recent than previously suspected. There is also ample evidence of eruptions all over the island, which adds to the challenge facing the island’s residents of safe evacuation.”

Anna Hicks, of UEA’s School of Environmental Sciences, said: “Previous researchers suggested that the last eruption of the summit happened more than 15,000 years ago, but we’ve been able to show that it has been active just 5,000 years ago and that several eruptions on the flanks of the volcano and coastal areas have occurred during the last 16,000 years.”

“Although it’s impossible to say when the next eruption will happen, the evidence we’ve uncovered has made islanders more aware of the risk from future eruptions, and as a result, they have reviewed their disaster management plan, and conducted their first-ever evacuation drill.”

Dr Jenni Barclay, of UEA’s School of Environmental Sciences said:“It is nice to see science in action. Darren made the measurements in Scotland, Anna fed the data directly to the islanders, and immediately they have assessed a variety of evacuation scenarios.”

The study was funded by a joint Natural Environment Research Council (NERC)-Economic and Social Research Council (ESRC) studentship, the British Geological Survey University Funding Initiative and a NERC Services & Facilities grant. SUERC is a collaborative facility operated jointly under a consortium agreement between the Universities of Glasgow and Edinburgh.