SCOTLAND’S most haunted road is getting its very own ghost tour in time for Halloween.

The A75 between Gretna and Annan, Dumfries-shire, has a history of ghostly goings-on dating back half a century.

Drivers have reported running over people or even “crashing” with other vehicles – only to stop and find nothing there. 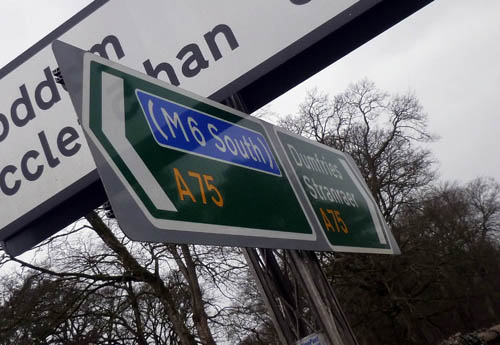 The road is said to be so spooky it was recently voted the third most-haunted in the UK.

Now a firm is organising a coach trip along the haunted highway, with the first outing due to go ahead today (Sat).

Mostly Ghostly are taking passengers on a two-hour, 100-mile tour on which they are promised visits the most notorious locations and to hear the most spine-tingling tales.

Kathleen Cronie, founder of the tour, said: “There’s been a lot of reports of happenings along the A75.

“Drivers have reported seeing a man with a sack over his head, and the chilling figure of a man with no eyes on crutches.

“Other mysterious sightings include a man in his 30s wearing a red top who also jumps in front of cars and then disappears.

“We have also heard reports of animal sightings along the road, chickens, ducks and other similar birds which is odd to say the least.

“When we try to communicate with them in a natural way, using a flower or a tray which they can move if they are present.

“We want to make people aware that we’re not the only people in this world and for local people to embrace their heritage and learn more about what’s happened in the past.

“Our aims of investigators it to discover things and learn the truth and we hope people will come forward and bring new information to light to help solve many mysteries.

Two areas of ghostly interest on the motorway is the old stretch of road between Annan and Gretna and the infamous haunted hotspot the Kinmount Straight.

Mary Wood a member of Mostly Ghostly had a real life scare when they were on a research visit at Kelhead Water, near Kinmount.

She claims she was walking around the quarry loch when she suddenly became very distressed, and had a terrible feeling that something bad had happened there.

Ms Cronie added: “Through our research we know that many years ago there was a terrible accident at the quarry, a fuse failed to light and a man went back and the took a blast in the face.

“We believe the man Mary and others have seen could be him.”