AN American student has set up Scotland’s first branch of a massively controversial US frat house.

The Delta Kappa Epsilon fraternity (DKE) was banned from Yale after members marched through the campus chanting misogynistic slogans.

Now a branch of DKE – which counts six American presidents among its former members – has been set up at Edinburgh University. 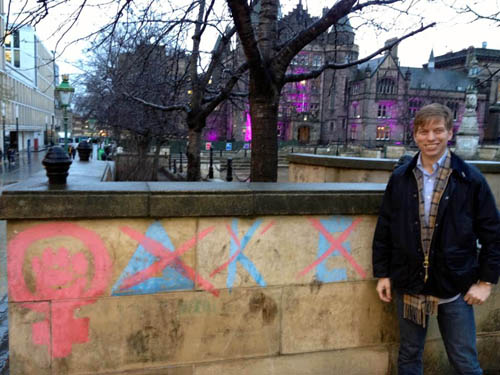 Founder Taylor Scott Wilson, the son of a businessman from Atlanta, Georgia, has vowed the Edinburgh branch will steer clear of the “debauchery” seen at Yale.

Mr Wilson, 20, insists the male-only group will be made up of “gentlemen, scholars and jolly good fellows” doing work for charity.

But in a sign that not all students welcome the fraternity, its DKE logo was chalked on to a square on campus – and defaced with pink chalk and a feminist symbol.

And when Mr Wilson organised an information session about the fraternity last month, he was met with “outrage” from feminist students who opposed its men-only policy.

Mr Wilson, a first-year Mandarin and Economics student, said 22 members had signed up so far, only four of whom are American.

Referring to the sexist behavior of members at Yale, he said:  “That kind of debauchery it not something we want to be a part of.

“DKE has 44,000 students, that event was years ago with not very many guys.

“It’s completely unacceptable – but this fraternity has given a lot back.”

He added: “I think a lot of the opposition comes from the stereotype. There’s a lot of vulgar stereotypes in films like American Pie.

“I think it will be a big task but we want to change peoples’ attitudes.”

In the US, the fraternity only accepts members with above average grade scores. In Edinburgh a similar policy will be applied and Mr Wilson hopes to recruit 25 members every academic year.

He said most of their activities would involve fundraising for charities such as the Salvation Army.

“It has an amazing history, which is part of the appeal. It’s two centuries old and it has a great set of traditions and contact with alumni,” he said.

Kirsty Haigh, a vice president at the Edinburgh University Students’ Association (EUSA), said: “It worries me that their founding Yale chapter was recently suspended for five years for misogynistic rituals and that they wish to be part of this.”

She added: “It may be possible to have a perfectly harmless fraternity that operates on our campus but this needs to operate very differently from the common tales of frats in the states.”

At Yale, DKE members chanted a slogan, the least offensive part of which was “No means yes”.

DKE’s chapter at Alberta University, Edmonton, Canada, was suspended after another video emerged of a bizarre “hazing” ritual where a student was seen lying on the ground bound with tape.

Another student appears to be confined inside a box in the video.