Raith Rovers winger Grant Anderson admits he is no longer tempted to give officials pelters like he used to – after qualifying as a referee himself.

The 28-year-old reckons he’s calmed down on the pitch after being given a new insight into the game with a whistle in his hand.

The former Hamilton Accies player is qualified to take charge of youth games and matches in the amateur ranks after being encouraged into the refereeing fraternity following a discussion with top-level whistler John Beaton. 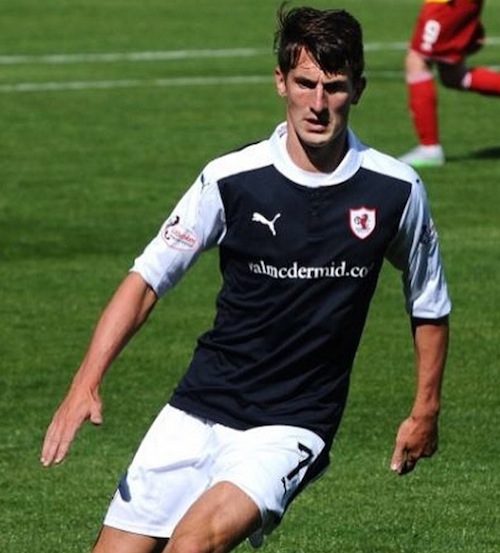 And, as he prepares to head back to first club Stenhousemuir in tonight’s Petrofac Training Cup tie, Anderson has revealed he is seriously thinking of going further in the profession once he hangs his boots up as a player.

He said: “The most natural way for footballers to go is down the coaching route, but I’ve never really been one for giving out advice.

“I’ve always thought other people could do it better than me. I’ve just worked hard on my own game and getting myself right.

“But I got talking to John Beaton after a game. I was just looking for information and asked him if he happened to have any booklets or pamphlets to let me read up about refereeing.

“I got thrown into it and I didn’t want to say ‘nah, you’re all right, I’m not turning up’, so I turned up. It was a 10-week course – and I passed it. It just happened that way.

“If I got the opportunity I would definitely have a look at going into refereeing once I hang up my boots. It’s another way to keep yourself involved in football.

“I don’t see myself giving up football any time soon, but I want to keep football in my life and refereeing would definitely be a way of keeping myself involved in the football world.”

Anderson has been keen to keep a low-profile in the games he has refereed, even pleading ignorance when he made his debut in a difficult introduction to the role.

But he believes swapping his strip for an official’s uniform has given him a better understanding of what it takes to be the man in the middle.

He added: “My very first game was a baptism of fire. It was a boy from Easterhouse and he was an absolute lunatic and giving me dog’s abuse.

“He was asking me what I knew about the game and I managed to keep my mouth shut.

“He was saying things like ‘have you ever kicked a ball before, ref?’ and I told him I’d never played football before.

“It does give you a different insight into the game. When I was younger I used to give the referees absolute dog’s abuse.

“I would like to think if you asked any of them they would tell you the same thing. It does give you another view on things.”

Anderson was a member of the Rovers side that lifted the Challenge Cup, then called the Ramsdens Cup, in 2012 with an extra-time victory over Rangers in the final and firmly believes that success can be repeated.

He continued: “This competition brings back brilliant memories for me. It’s my only senior silverware, to date, and to do it the way we did was maybe more special than it should have been.

“It was the Ramsdens Cup but to win it against Rangers at Easter Road in front of a full house was a brilliant day. I really enjoyed that.

“You’ve got to think we’ve got a chance of doing it again.

“If you look at Alloa last season, they knocked Rangers out, so it’s not impossible. You’ve got to go into it thinking you’ve got a chance of winning it.

“If you don’t do that there’s not really any point in taking part. You’ve got to think you’ve got a good chance.”