Scotland youngster Oliver Burke has vowed that he will not be overawed going up against Euro 2016 favourites France tomorrow – insisting: ‘names don’t faze me’.

The friendly clash in Metz is the tournament host’s last warm-up match and manager Didier Deschamps is expected to give game time to all his star names.

But Burke is adamant that he will not be intimidated against the French.

“There’s definitely world class quality there but you can’t think about that.

“You’ve got to go and play your game, know what you’re good at. Play as a team and you can beat anyone.”

Even though Scotland will not be competing in the European Championship finals, Burke has loved his time away with the national squad.

He added: “It’s a massive confidence booster and I feel like I’m getting better and better each day.

“Training has been brilliant, I’ve really enjoyed myself and I’m very privileged to be here with the Scotland seniors.

“I can only get better, I’m young but I’m striving and I’m very focussed in what I want to achieve.” 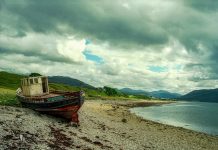 The Five Scottish Seaside Towns You Need to Visit