DRAMATIC video shows knife-wielding thugs attack staff in a barber shop – who drive them off with blows from a mop.

The attackers pounce without warning on three men in the shop, dragging them to the floor and unleashing kicks and punches.

At least one of the attackers then pulls out a knife as the barber shop staff fight back with chairs, brooms and mops, eventually driving off the thugs.

The incident happened at an unidentified barber’s shop in Sheffield on Thursday.

The footage shows two hooded men walking into the barbers. Two workers are seen by a wall, one of which is holding a power drill. Another is cleaning up by one of the chairs.

The two men linger around the shop for another 90 seconds before pouncing on two of the workers.

One of the attackers, wearing a puffer jacket, waits until the shop worker turns his back to him before shrouding the worker’s hood over his eyes and bringing him to the floor. The other attacker simultaneously pounces on another worker leaving one worker with a power drill.

The workers are kicked in the head and beaten to the floor. The thug with the puffer jacket then pulls out what appears to be a knife and begins slashing one of the workers.

However, his colleagues come to his aid as they retaliate by throwing chairs at the attackers, at this point the other thug pulls out a large black object and begins hammering one of the workers with it.

One of the men bravely tried to grab the black weapon from the attacker, but is then kneed multiple times in the face.

After over a minute of fighting the attackers gang up on one worker by the shop entrance. He seems to be struggling before his colleague comes to his aid with a mop, and starts smashing over the heads and bodies of the thugs. 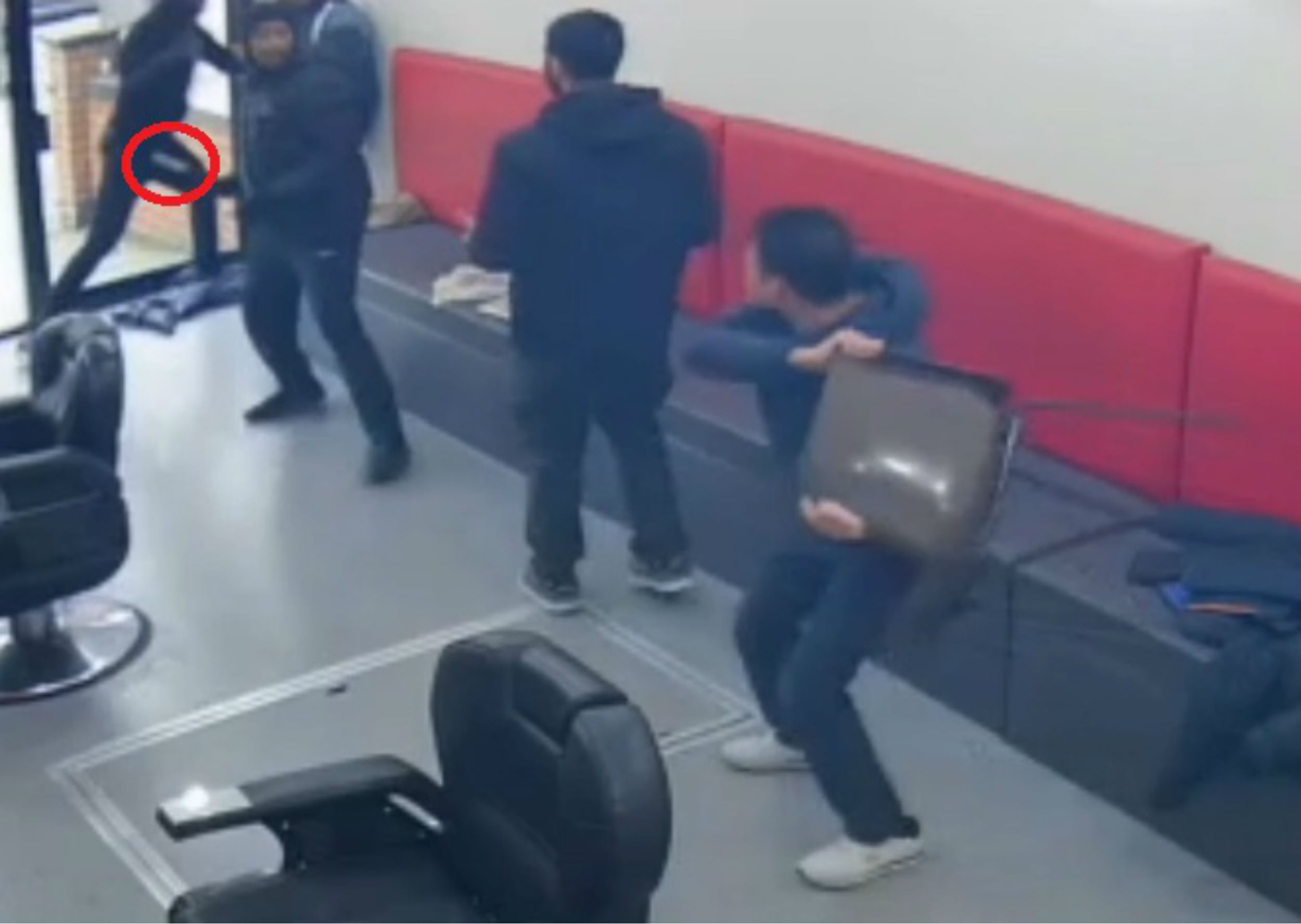 The video has shocked many in the comments.

Joshua Rees said: “This is in Sheffield, Page Hall. I go here for my haircut every week. These guys were under and random attacks. Anyone who knows the barbers and the owner [they] are really nice people and [don’t] deserve this. Obviously the people were after money, and these guys put up a fight back. Well done boy.”

Jane Shoeib added: “Those s**** need to get a job instead of attacking people who are trying to earn a living, scumbags.”

Gary Leask wrote: “Obviously someone is jealous or intimidated by their business, maybe a rival barber shop or gangsters trying to extort money or scare out of property.”

Mark Ginnelly said: “Obviously some disgruntled customers I reckon obviously got a s*** haircut or they are setting up near another barber shop.”

Richard Mills Get this s*** off our streets cops. Do your f****** job rather than harassing the football lot for once. They dare not go up that area and do some policing.”

The barber shop Q Cutz Hair Styles on Page Hall Road in Sheffield today confirmed it was their establishment that was subjected to the attack. However, they have declined to comment on the incident.