THIS is the moment a garage customer loses his temper and begins punching the counter’s protective screen in a foul-mouthed fit of rage.

The altercation, which took place at an Esso in Luton, Bedfordshire, began after the man filled up his car with petrol and claimed to have forgotten his wallet.

Staff at the garage tried to get the man to leave his details for payment, but things became heated and he lashed out during the incident last Tuesday.

As the clip begins, the man is seen explaining to the garage worker that he has forgotten his wallet and cannot pay for the £10 of fuel he has put in.

The customer tries to reassure the staff member saying: “If I was going to rob you I’d have put £30 in or £50.”

The employee then brings out a form and asks for the man’s details, which makes him irate.

“Why are you trying to be a bad man for?”

Suddenly, he reaches through the plastic protective screen to try and rip the form from the shopkeepers hand.

He shouts: “Who are you talking to you c***?” before slamming his fist into the screen.

There is a loud bang and the plastic folds under him, he leans over the counter and shouts: “I’m going to smash you up you c***.”

At this point the shopkeeper flees, but is pursued by the man, who continues shouting abuse at him.

A few moments later, the men return to the counter and another customer enters the store.

However, the customer becomes wound up again, prompting the shopkeeper to give him the finger.

The customer punches the screen again, slamming it hard and forcing the garage worker to run away as the other customer attempts to placate the situation.

The other customer is seen trying to calm the man down and begs the shopkeeper not to phone the police.

Finally the man decided to leave, but not before he lobs a bag of crisps at the garage worker and calls him a “piece of s***”.

The store’s owner, Anthony Monoaj, 42, took to social media to share the footage.

He wrote online: “Bloody scumbag tried to assault my staff and was very aggressive. He put in fuel and pretended like he left his card and wallet at home.

“When staff asked his details to fill the form he went crazy.

“Whoever you are you are going to get charged by the police and soon be on the road doing community work u low life p***.”

Speaking today, Anthony said: “Nobody was hurt but my staff were a bit shaken up.

“If there had been no screen though he would have punched him.

“My staff remained quite calm for most of it and pressed the panic button, so police came about 20 minutes later.

“This kind of thing happens all the time here. I’m a franchise owner so when people do it it’s me who has to pay. I lost £5000 last year.

“He needs to go to an anger management program I think, very violent and threatening behaviour.”

A spokeswoman for Bedfordshire Police said: “We were called at 4.25pm on Sunday 5 July to a report of a man refusing to pay for fuel, and behaving aggressively towards a staff member at a fuel station on Dunstable Road, Luton.

“Officers arrived on the scene at 4.40pm, but the man had already left the location, after causing damage to the Perspex screen in front of the till.

“The offender is described as white, around 5’9”, large muscular build, driving a grey Peugeot 207.

“We do not tolerate violent behaviour towards retail workers in our county, and if anyone has any information about this incident, please get in touch via our online reporting centre at https://www.bedfordshire.police.uk/bedfordshire/report/Report and quote reference number 40/36095/20.” 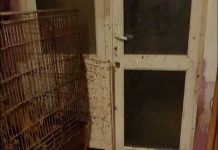 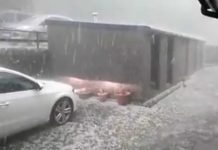 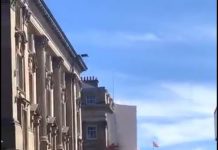