AN OBAN hotel has become the only establishment in the town to be awarded a highly coveted AA 4-star status.

Marc Gardiner, General Manager, and his team at the Crerar Oban Bay Hotel are revelling in their achievements having earned the prestigious accolade in spite of disruption from Covid-19.

The award was given following a detailed and anonymous inspection by the hospitality inspectors, with the hotel’s facilities and hospitality reaching the top quarter of all 4-star hotels in the UK.

Oban born Crerar Hotels Chairman, Paddy Crerar CBE said: “It’s people that make hotels and knowing Marc’s skill brought us 4-stars at our Loch Fyne Hotel in Inveraray, we had no doubts that his ability to unlock and motivate a team that would deliver the same for us at the Oban Bay.

“Of course we are completely delighted, and at the same time we fully expected it. The people at the Oban Bay work brilliantly together. They bring fun to what they do and that shines through in their hospitality.

“Their job is to stay authentic and my goodness they really do. From Lexi, the hotel collie dog, to Marc the General Manager, everyone played part in this superb team achievement.”

New restaurant The Grill Room was also singled out by inspectors and in recognition of their high standards the town now has its second AA Rosette establishment.

Chris Wayne -Wills, CEO of Crerar Hotels added: “It’s a real credit to the team. The AA rosette is a particularly good award for our team to win. It’s tough to achieve at any time and very rare on an inspector’s first visit.

“This is all thanks to our incredible kitchen brigade and front of house team.

“Knowing Oban well, as my fiancé’s an Oban girl, I know just how high the food standards are in the town. To be at the top, which is what this award recognises, is really quite humbling. I’m delighted for the team.”

The AA is the worlds most recognised and trusted brands for rating accommodation, hospitality and food. Introduced in 1912, hotels have to go through extensive annual inspections by highly trained “mystery guests” before being awarded up to a maximum of five-stars.

While Marc Gardner, General Manager of Oban Bay, revealed he had no idea he was even being inspected, he explained: “We only know once the inspector has completed their assessment – it is always a heart stopping moment when they hand over their card and ask to speak with the manager

“It’s just really nice to get some good news in what’s been a tough year for us all.” 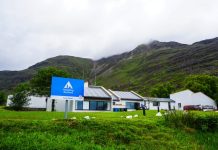