A SPACE industry pioneer and leading business executive has been appointed as the next Chancellor of Edinburgh Napier University.

The Edinburgh-born President of industry group UKspace, Will Whitehorn, takes up his post at the University on August 1, taking over from current Chancellor Dr David Eustace.

Educated at Edinburgh Academy and the University of Aberdeen, Whitehorn enjoyed watching aircraft at Edinburgh Airport as a youngster and spent his early career as a crewman on North Sea search-and-rescue helicopters.

After stints at Thomas Cook, TSB Group and Lombard Communications, he was recruited to Virgin to boost the Group’s image in the City, and became a key lieutenant to Sir Richard Branson.

As Brand Development and Corporate Affairs Director, he was at the heart of the entertainment, media and travel giant’s relentless quest for new business opportunities.

Whitehorn worked on a series of major Virgin projects, including the Pendolino train, and later took up the post of President at Virgin Galactic, which saw him play a central role in developing the concept of commercial space travel.

Whitehorn, 61, said: “I am deeply honoured to have been chosen as the new Chancellor of this great University in the city I was born and raised in.

“My career has been founded in my education.

“University should be an adventure and Edinburgh Napier does a better job of fulfilling that dream for students than many educational institutions around the country can even dream of and I feel privileged to have the opportunity to play my small part in taking the achievements of the University to new heights.

“But there are great challenges for education in Scotland in the political and economic minefields that lie ahead, and I am also mindful of the great responsibility I will also have in helping students and academics alike to navigate that future.”

“His exciting and varied business background will serve as inspiration to our students, who will be keen to engage with him on campus and find out what makes him tick as they set out to make their own mark on the world.

“His enthusiasm and passion for innovation and entrepreneurialism will equally inspire our staff, and all who align with our values.

“He will be a worthy successor to David Eustace, who brought deep commitment and energy to the role during his six years at the University.” 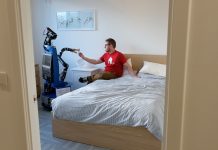