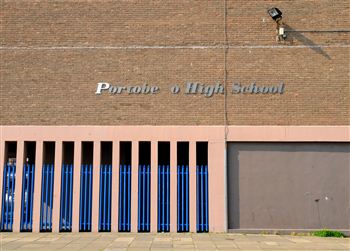 SCHOOL pupils have been forced to sit their Highers in makeshift exam rooms after their main hall was deliberately flooded.

Hundreds of children at Portobello High in Edinburgh were evacuated after pools of water were discovered in their school building on Tuesday morning.

Council chiefs have confirmed a tap that had been deliberately left on caused the flood and police are now investigating the matter.

The 1960s building is now only open to senior pupils who are currently sitting their Higher and Standard Grade exams.

Councillors have confirmed the flood started on the sixth floor of the eighth storey building when someone stuffed a plughole with paper towels before leaving the taps running.

The incident is believed to have happened on Saturday and as the school was shut on Bank Holiday Monday, teachers only discovered the damage on Tuesday.

By this time six of the schools’ eight floors had suffered severe water damage, including the main examination hall.

George Sharp, whose grandson sat an exam in the school on Tuesday, said: “They had to move the exams out of the exam room and into elsewhere in the building because of the flooding.

“It’s not conducive to sit exams in those conditions.”

The school is not expected to reopen to other pupils until Monday at the earliest.

A city council spokeswoman said: “The cause of the flooding was a tap left running, which is being investigated.

“Work is being carried out to make repairs as necessary and exams are continuing as normal for senior students.

“Pupils from S1 to S3 have been sent home and a decision will be taken later today as to when all pupils can return to school.

“The school is working hard with local authority staff to make the necessary repairs to allow the school to return to normal.”

Parent Liz Barron, who has a 12-year-old daughter at the school, says the flood raises serious issues about the school’s lack of security.

She said: “I never even got a phone call from the school to let me know what was happening. All I’ve had since is a recorded message telling me not to send my daughter back to school.

“There’s been nothing put in place while the school’s shut and I can’t afford to take time off work to look after her.

“If they can’t get me childcare, I’ll just be putting her in a taxi and sending her up to Gillian Tee’s (director of education) office to tell her to look after her.”

A Lothian & Borders police spokesman last night confirmed they were treating the incident as suspected vandalism and were currently investigating the matter.