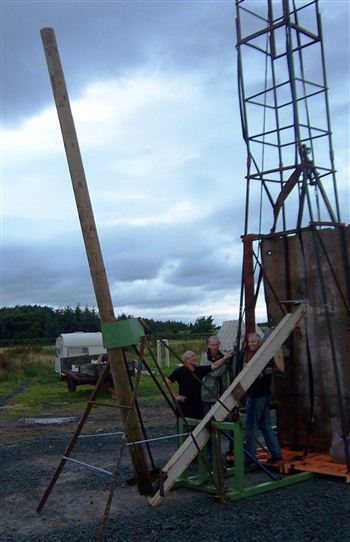 THREE Scots bikers who invented a unique caber tossing machine will star in the new series of Scrapheap Challenge.

Riders Robin Burnside, George Epsworth and Nigel Wanless were set the task by programme makers and impressed with their massive design.

And the patriotic team – known as Classic Bs – were delighted to be challenged to make a giant contraption mimicking one of Scotland’s best known highland games.

According to Kent-born Nigel – who has lived in Scotland for more than 20 years – he and his “very patriotic colleagues” were delighted to be given the chance to build the device.

He said: We did not come up with the task ourselves it was set by the show. They must have a Scot down there in Bristol where the programme makers are.

“I have been in Scotland since 1986 and have a Scottish wife and three Scottish girls so I’m as Scottish as an adopted Scot can be allowed to be.

“But as soon as we heard about it, our ears pricked up and we were very excited.”

The caber tossing machine uses a simple see-saw mechanism to hurtle the giant logs through the air.

But Nigel insists that despite the contraption’s monstrous size, it is in fact, very simple.

He said: “The machine is a veritable behemoth. We have been advised by the camera crew that it is definitely the biggest.”

“The design was left to our creativity. Its essence is simplicity, using gravity. Basically, we drop a very heavy weight from a significant height onto a see-saw, which tosses the caber, or flings the boulder. If you’re into physics, it’s all about the Principle of Moments.”

Scrapheap Challenge, which celebrates its tenth anniversary this year, has already visited the members of the Ayr Classic Motorcycle Club to film them as they finished the assembling of their machine at a local activities centre.

And for Nigel, the chance to showcase their design in front of television cameras was a memorable experience, in more ways than one.

He said: “I had to watch my manners as I had a microphone strapped to me all day. But it was a good day for the Classic B’s Team as we achieved a lot of fabrication that day. It was a bit un-nerving having the camera around us, especially when I succeeded in setting my boiler suit alight with the grinder sparks.”

The caber tossing machine may be the first that the Nigel, Robin and George have constructed together, however, as passionate motorcycle fans they have each had experience of building in the past.

And Nigel explained that the idea to appear on the show was down to avid watcher and builder, George.

He said: “We’re all keen fans, but I guess George would be the biggest fan as he just loves making things out of seemingly nothing and fixing things when others would walk away.

“As the Classic B’s Team, it’s our first joint effort. As individuals, however, we do have a passion for building things two-wheeled.

The bikers will now pit their caber tosser against teams from Scotland and North England in the regional final at Blair Atholl Castle in Perthshire later this month.

And while Nigel thinks competing in Scotland gives the group home advantage, he conceded that winning will be a difficult task.

He said: “The fact that its on home soil makes us think the competition is there to be won.

“But I would expect us to be either surprised victors or, perhaps more likely, glorious failures.

“It’s all about having a bit of fun first and foremost – even if it is at the expense of our individual self-esteem.”