REBUS author Ian Rankin has revealed he is working on the screenplay of a classic novel.

The Fife-born writer is in talks with a well-known director and producer to create a film of The Confessions of Justified Sinner by James Hogg.

And the next few months will be busy for the crime writer as he prepares to start literary life without his most famous character – when he begins a new novel in January.

But he admits he only knows three things about it, and won’t know more until he starts writing.

He said: “I am starting to work on a new book. It’s very early in the planning stage but I do know it will be a crime story, it will be set in Scotland and it won’t feature Rebus.

“I won’t really know much more about it until I start writing it properly – that’s how I work.”

He is being kept busy by another project – the screenplay for a major new film.

He said: “I’m working on a really exciting project with a well-known director and producer it’s the screen play to one of Scotland’s great unread classics, The Confessions of a Justified Sinner.

“We have already approached a number of film councils about funding.”

Rankin came face-to-face with Scotland’s most famous serial killers, Burke and Hare, as he officially opened the £2million building.

Luckily for the author, he only met the grave robbers life masks – which are going on display in the museum. 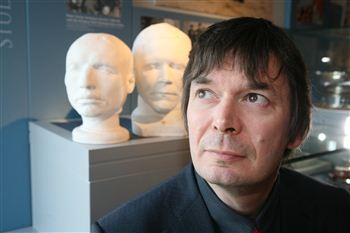 Rankin’s latest novel Doors Open is set in the National Gallery of Scotland but he joked that perhaps he wasn’t first choice to open the brand new attraction.

He said: “I can’t help feel they went down the list and after John Cleese and JK Rowling turned it down they got to me.

“Seriously though, I’m really proud to be asked to open the new St Andrews University Museum. I used to come here for my holidays as a child, so St Andrew’s holds a lot of personal memories for me.

“Personally I love museums as they give me a lot of inspiration for my writing.”

The new museum at Scotland’s oldest university was made possible by a £500,000 grant from the heritage lottery fund along with a number of private and charitable donations.

These include three medieval maces, paintings medals and rare books.

Colin McLean, head of the heritage lottery fun in Scotland said: “The story of this important sear of learning and how it has influenced the lives of students and staff can now be conserved and celebrated with the opening of this fascinating museum. We are delighted to have helped make that happen.”