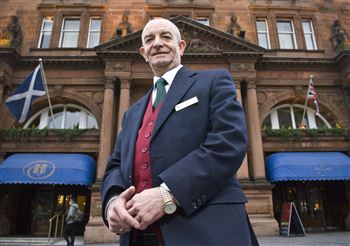 A HOTEL concierge celebrating 45 years service to one of Scotland’s most prestigious hotels has revealed he once tried to throw Liz Taylor out because she “looked really scruffy”.

Billy Garioch, 60, has been the first face visitors see when they pull up to the five-star Caledonian Hotel in Edinburgh for almost half a century.

But that milestone might never have happened if he had actually managed to throw out Taylor who many considered to be the most beautiful and famous woman in the world at the time.

Looking for some light refreshment, Taylor, and her actor husband Richard Burton, popped into the iconic hotel for a quick cup of coffee.

But the pair drew dirty looks from the hotel’s management who had failed to recognise them because Burton was wearing a donkey jacket and Taylor was sporting paint-splattered jeans.

Billy was ordered to ask the pair to leave the hotel before the astonished doorman eventually recognised Ms Taylor.

He said: “It all began when an MG Midget sports car rolled up at the hotel and two people got out very quickly. I was on the front door at the time and they just rushed by.

“They then sat down in the lounge and the head porter said to me ‘Have you seen what they are wearing?’ My boss then came through and told me ask them to leave – they were just unsuitably dressed to be in the hotel.

“She just looked really scruffy. Her jeans were splattered with paint.

“So I went over and the man asked for two coffees, but just as I was about to ask them to leave, the lady removed her head scarf and lo and behold it was Liz Taylor and Richard Burton.

“I rushed to get my boss and before I knew it, there were lots of people eagerly serving them.”

The embarrassing gaffe happened in the late 1960’s when Taylor and Burton were in the Scottish capital in connection with the filming of The Taming of the Shrew movie in which both were starring.

Billy, who began his career at the Caledonian Hotel as a page boy in 1964, is considered the longest serving concierge in the city.

The world-famous hotel has proved lucky for the Edinburgh-born grandad-of-two as he met his wife Helen, 57, met there after her mother, a chambermaid at the hotel, played matchmaker.

Billy was presented with £1000 of vouchers for his service to the hotel and has admitted he plans to stay on for a good few years yet.

He said: “The hotel has essentially been my life. It’s been a great experience and I love working there.

“It’s the people that make it all worthwhile – we’re a team, and that’s why I have stayed so long.”