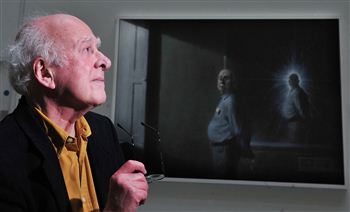 A PORTRAIT of the boffin behind the ‘big bang’ experiment has been unveiled.

It comes as the race hots up between Europe and America to find the elusive ‘Higgs boson’ – the only remaining undiscovered particle in science.

European and America scientists have each spent around £5billion on experiments hunting for the ‘God particle’ – so-called because its discovery could answer fundamental questions of science and space.

A painted tribute to the theory’s father was revealed on Monday at the University of Edinburgh, where he had his ‘Eureka moment 45 years ago.

Ken Currie’s explosive oil painting, commissioned by the uni, shows the retired researcher at his home in Edinburgh’s new town.

It is widely expected that confirmation of existence of the Higgs boson is likely to lead to Professor Higgs getting a Nobel Prize for physics.

Mr Currie said: “It has been a great honour and privilege to be given the opportunity to paint Professor Peter Higgs.

“I have always had a deep admiration and respect for the work many scientists pursue.

“Not least that of Peter Higgs himself along with his many colleagues around the world who, with the utmost dedication and tenacity, are trying to get as near to the truth about the nature of the universe as is humanly possible.” 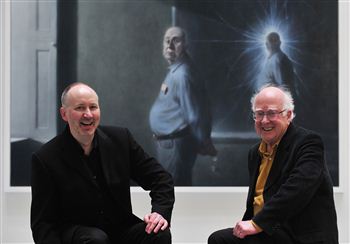 “We are delighted with Ken Currie’s painting and will be proud to display it for posterity.”

Europe’s particle physics lab, Cern, is reported to be losing ground rapidly to its US rival in the race to discover the Higgs boson.

Physicians at the Illinois-based Fermilab Tevatron reckon they will win the race after the Large Hadron Collider (LHC) in Switzerland suffered a massive magnet failure, meaning they couldn’t get the sub-atomic particles moving.

The setback will halt experiments at the accelerator for at least 12 months.

And Fermilab have taken advantage, cranking up the intensity of research at their Tevatron accelerator.

Dr Dmitri Denisov of the American team said: “We now have a very, very good chance that we will see hints of the Higgs before the LHC will.

“I think we have the next two years to find it and by that time we expect to say something very strong.

“The probability of our discovering the Higgs is very good – and we are talking about seeing hints of the Higgs by this summer.”

Prof Higgs hit the headlines last year when he dismissed speculation it could end the world as “a load of crap.”

He said he had a bottle of champagne in his cellar at home for the conclusion of the experiment, but was yet to put it on ice.

He added: “I’ll celebrate once we get the results.”