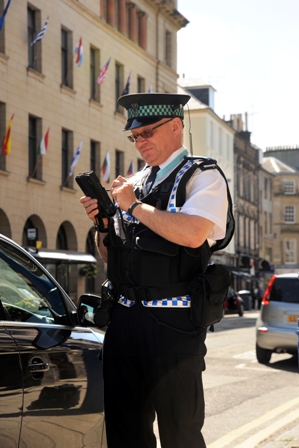 SPACE-AGE traffic wardens in Scotland have adopted a high-tech approach to dealing with irate motorists –filming them with a head-mounted camera.

Parking attendants in Perth have been wearing the headsets since March, using them as a “third eye” to record the behaviour of those unhappy with their tickets.

And they say the daily abuse from angry drivers has stopped completely since the new gizmos were introduced.

The device is small enough to be worn on the side of the head, and is linked to a video recorder which stores all of the footage recorded while traffic wardens go about their business.

The 16 attendants trialling the cameras have that the £25,000 system that they have all but eliminated verbal and physical abuse, and have helped to resolve a large number of ticket disputes.

The footage could even be passed to police after an altercation and used as evidence in court.

Richard Valentine, parking superintendent for Perth & Kinross Council, said that the equipment was light, easy to carry and had been a great technological boon to their wardens.

He said: “Instances of verbal abuse, which were quite prevalent, have now almost ceased.

“Since we have introduced this equipment I have had no reports from our parking attendants with regard to any on-street incidents involving drivers, contractors or general passers-by being aggressive.

“The equipment has been of great benefit to us particularly when it comes to the investigation of official complaints from the public regarding the behaviour of our parking attendants.

“Before the use of this equipment, it was more difficult to investigate customer complaints due to lack of corroboration.

“Now, most of these have proven to be completely unfounded as verified by the video recordings.”

The system is already used by Tayside Police to help with gathering evidence, and the firm who created the gadgets, SCS Security Design, believe that the head-strap cameras have huge potential throughout the UK.

Malcolm Strachan, manager of special projects at the Perth-based security firm, said: “The parking attendants like the system and it seems to have made their job a lot easier.

“We have been extremely pleased with the positive feedback we’re receiving for the helmets.”