A MAN who smashed a garage worker’s teeth and glasses on Christmas Day has been ordered to pay compensation to his victim. 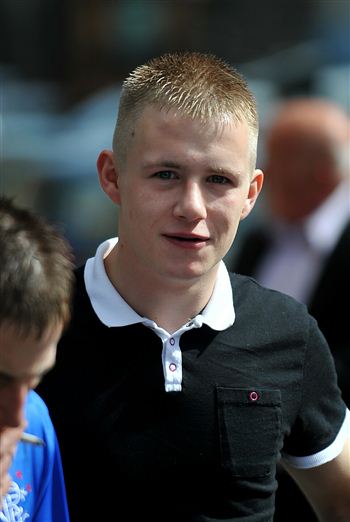 Drunken yob Jaime Anderson, 22, was angry that he had to be served through a hatch at the Esso garage near Edinburgh Airport.

He barged into the petrol station and grabbed worker Kevin Turnbull by the head before slamming his face into his knee.

Mr Turnbull’s colleague hit the panic button and police arrived to find blood spilled over the Newbridge filling station forecourt, while Anderson was found staggering down the road nearby.

Yesterday (Tues) court heard that his victim still hasn’t been able to afford the dental work or new glasses he needs, prompting a Sheriff to demand Anderson stumps up the £600.

He said: “At 11pm Mr Turnbull was just finishing his shift and waiting in the door for a taxi home.

“Anderson turned to push past him and Mr Turnbull explained that the shop was now closed and that he would have to go to the serving hatch.

“He went to lock the door but felt a heavy blow to the side of his face, followed by Anderson kneeing him in his face having pulled down his head towards the ground.”

Anderson was arrested nearby, while Mr Turnbull went to Edinburgh Royal Infirmary later on Boxing Day.

He needed five stitches to his right eye and had to take two weeks of work while the swelling around his face went down.

Mr Higgins added: “His spectacles were broken and it was to cost him £300 to replace these.

“A cap on his teeth was broken off during the assault but he was unable to afford the £300 dental treatment, which still needs to be done.”

When interviewed by police, Anderson said: “I will admit it but I don’t know what I did – I can’t f***ing remember.”

Sheriff Deirdre McNeill asked for CCTV footage of the attack and asked Anderson whether he could pay for Mr Turnbull’s glasses and dental work.

She said: “Apart from a horrible assault, the complainer has been left out of pocket.

“I don’t see any reason why a victim should be left out of pocket for essentials such as spectacles and broken teeth.

“Is there any way you can get together £600, because it could affect your sentence.”

Anderson replied: “Not just yet, no.”

Sentence was deferred until later this month for background reports on Anderson.