A TEN-week-old baby boy was forced to suffer for over a week with a brain haemorrhage after a man fell on stairs while holding him. 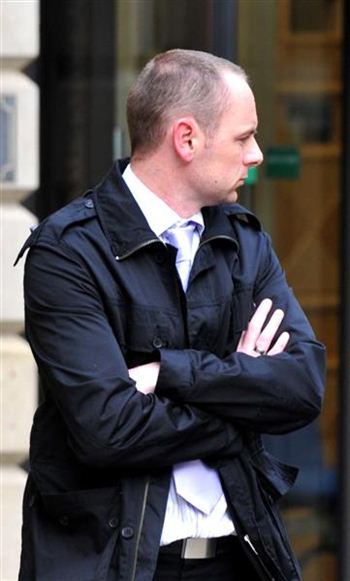 Robin Hay, 33, was meant to be looking after the tot – who cannot be named – at an address in Edinburgh last year.

Worried relatives noticed veins were bulging from the baby’s head, but Hay shrugged off their concerns and failed to explain the youngster’s head injury.

A health visitor making a routine check was not told about the tumble either.

A second medical visitor flagged up the injuries a week later and told Hay to take the baby to the capital’s Royal Hospital for Sick Kids “immediately.”

Instead, Hay first went back to his own home before taking the injured baby to hospital.

Following a scan, a tap was inserted into the tot’s head to drain blood coming from a tear on his brain.

After the medics treated the tot, checks were carried out and the baby – now aged almost a year and a half – is understood to have made a full recovery with no obvious lasting injuries or impairment.

Police and social workers investigated, and today (Tues) Hay appeared at Edinburgh Sheriff Court to plead guilty to wilful neglect of a child and failing to seek timeous medical attention.

Fiscal Depute Ruth Ross-Davie said: “Sometime around July 21 in 2008 (the baby) suffered injuries to his head and those injuries ought to have been apparent to Mr Hay.

“It is not known how (the baby) came about his injuries.

“Medical staff at Edinburgh’s Royal Hospital for Sick Kids reported that they were likely to be non-accidental, but Mr Hay says he doesn’t know of how he came about the injuries.

“He does say that on July 20 he had fallen on the stairs while holding (the baby) and he may have bumped his head then.

“On July 21 there was a routine appointment with a health visitor but Mr Hay did not mention this incident.”

She said that on three separate occasions family members spotted that the baby’s head was “swollen,” that he had “an aversion to light,” he seemed “unsettled” and that his “veins were prominent.”

It wasn’t until a second routine health check on July 29 that a health visitor took action.

Mrs Ross-Davie said: “None of these symptoms were mentioned but the health visitor was concerned by the baby’s protruding head veins and swollen head.

“They referred the baby to a GP and advised Mr Hay to take him to the Royal Hospital for Sick Kids immediately.

“Instead, he took him home first and then went to the hospital.”

Mitigation in defence of Mr Hay was reserved after Sheriff Neil MacKinnon called for background reports.

Special bail conditions mean Hay must not come into contact with the child unless under supervision.