A HOGMANAY disco inferno was sparked when a top Scottish DJ launched two giant fireworks into a nightclub. 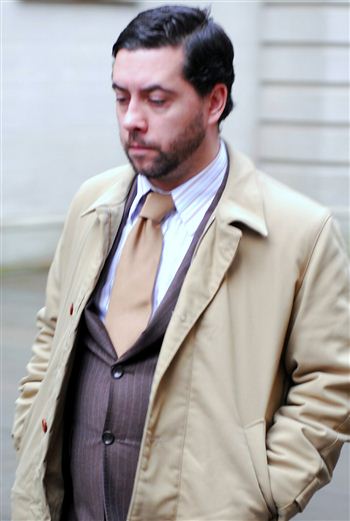 Fire rained onto the dancefloor from the ceiling of Edinburgh’s Luna club moments after the midnight bells between 2008 and 2009.

But others suffered burns after the fire melted a plastic cargo net on the ceiling, sending a stream of flames across the 650-capacity room.

DJ Jason Cortez claimed he was wrongly advised that the six-metre pyrotechnics were suitable for indoor use.

But a Sheriff slammed his “unbelievable attitude” today (Tuesday), saying it was fortunate nobody had died.

Sheriff Graeme Warner compared the blaze to a nightclub tragedy in Russia earlier this month, for which the death-toll is currently 148.

He was due to stand trial but yesterday admitted responsibility for a catalogue of fire safety failures at the Picardy Place venue on January 1.

He blamed a Glasgow supplier, insisting he was given fireworks with a range twice the height of those he ordered.

A three-minute video was shown in court of the aftermath of the firework blunder.

Fiscal Depute Gillian More said: “He has pled guilty to failing to carry out an adequate fire safety assessment.

“On arrival the fire and rescue service were told two fireworks had been ignited.

“They had set fire and burned away plastic netting above the stage and the fire crew entered and extinguished it.

“Two pyrotechnic devices were discovered on the stage.”

Luna’s general manager David Ross had the same charges against him dropped after Cormack admitted sole responsibility for the New Year bash.

“People had been burnt”

He pleaded with police later on New Year’s Day during an interview, saying “I didn’t intend to put anyone’s life at risk.”

He told them: “I organised the firework display tonight but I didn’t know I should have fire service approval first.

“I saw the ceiling netting falling and we started to evacuate people.

“I found out later that people had been burnt.”

When asked if he undertook a fire safety risk assessment, he said: “The company I bought them from said the conversation we had was a form of risk assessment.

“I was relying on the expertise of the company to supply me with the correct equipment.

“But I was unaware of the height restriction on the firework and I have no experience or training with indoor pyrotechnics.

“If I had any doubts about the firework I wouldn’t have set it off.”

Having played alongside some of the world’s biggest DJs, including Italy’s Mauro Picotto, and had songs played on BBC Radio 1’s Judge Jules show, Cormack is now jobless and on benefits.

His defence agent Angus McLennan said: ““He is in financial ruin as a result of this.

“He ran his own business as an events manager and was also paid by this nightclub.

“It was a very unfortunate set of circumstances and very fortunately there wasn’t any tragedy arising out of this.

“It was thanks to the fire service and actions of staff that there wasn’t any more significant injury than being burnt by molten plastic.

“He had spoken to the company in Glasgow who supplied the fireworks, specifically a friend who was familiar with Luna.

“There was a suggestion these particular fireworks were suitable.

“Ultimately the wrong fireworks had been supplied.

“He set off the fireworks at midnight expecting them to go up three metres and instead they travelled six metres up causing the net to catch alight.

“Some people were treating this occurrence as part of the entertainment of the night.”

After watching a video of the fire, Sheriff Warner told Cormack that the maximum fine for breaching the Fire Act was £20,000.

He said: “I’m sure you don’t need me to tell you I recall seeing an incident in the news recently about a similar event in Russia where over 100 were killed.

“It doesn’t take a rocket scientist to see the comparison.

“It seems to me that to even consider setting off fireworks indoors was grossly risky and to say the least a bit foolhardy.

“You may as well have given a child a revolver handgun and then expressed astonishment when an injury occurs.

“Your attitude was almost unbelievable in these days of health and safety.

“You had no risk assessment and no knowledge other than a chat with a guy who had been in the club once.

Only “sheer luck prevented a more catastrophic outcome” according to Mike Partington, the group manager of Lothian and Borders Fire and Rescue‘s Fire Safety Department.

He said: “This incident highlighted very worrying breaches in public safety and management control. There is no doubt that it was sheer luck which prevented a more catastrophic outcome.

“The decision to use fireworks indoors with no risk assessment carried out to consider the implications, put the lives of 400 clubbers celebrating the end of the year in serious jeopardy.

“Most shocking was footage shot from inside the club which showed clubbers dancing whilst burning debris fell from the roof. They were clearly oblivious to the danger they were in.

“When the fire service arrived there were still a number of people inside the premises and no sign of an organised evacuation process.

“We want to stress that duty holders have a responsibility to ensure premises are safe for their customers.

“We are happy to give advice and help individuals and businesses comply with their obligations. But in cases where we find there has been a negligent approach to fire safety we will investigate and where appropriate report offenders to the procurator fiscal.

“We hope the outcome of these court proceedings will serve as a warning to others who hold positions of responsibility for the safety of the public.

“To neglect the importance of these responsibilities could quite literally cost lives.”