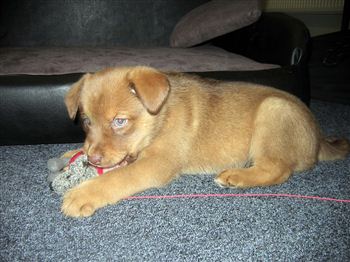 A TINY puppy was left to die in freezing temperatures after being dumped in a plastic bag.

The six-week-old female crossbreed was found shivering in a snow-covered field by a dog walker in Catrine, Ayrshire.

Luckily the dog walker’s pet sniffed out the lonely pup inside a Farmfoods carrier bag on Monday afternoon.

And now the pooch – renamed Katie – is in the hands of Glasgow Animal Rescue and Rehoming Centre and is expected to make a full recovery.

The Scottish SPCA is now on the hunt for Katie’s owner.

Scottish SPCA ambulance driver Jean MacKay said: “Katie was found about 4pm on Monday inside a plastic ‘Farmfoods’ carrier bag in the middle of the field which is located next to a row of garages near Somerville Street.

“It was actually the lady’s dog that ran into the field and began sniffing at the bag and there was Katie, shivering inside.

“We don‘t know how long she’d been there for but we think it was a matter of hours rather than days because a little pup like Katie could not have survived for very long in the freezing cold.

“Unfortunately lots of puppies in particular tend to be dumped after Christmas when they become unwanted presents, though that’s perhaps unlikely in this case given Katie’s age.”

Abandoning an animal is a criminal offence that can hold penalties of a maximum six months in prison, a £5,000 fine or both.

Anyone found guilty can be banned from keeping animals.

Anyone with information should contact the Scottish SPCA Animal Helpline on 03000 999 999.