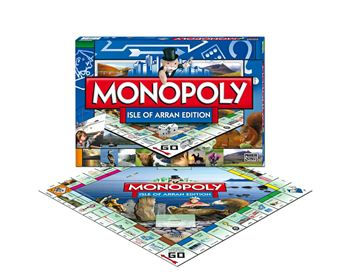 ONE of Scotland’s most picturesque islands has been given its own version of board game bestseller Monopoly – despite having just 4,000 inhabitants.

Brodick and Lamlash on the Isle of Arran have replaced the plush tree-lined streets of Mayfair and Park Lane in a new special edition of the family favourite.

Island resident Graham Chappell designed the new version after a series of rainy summers left holidaymakers stuck indoors and unable to see the sights for themselves.

The 44-year-old, owner of Arran Graphics, moved to the island 15 years ago after running a hotel on Shetland and said he always wanted to design a board game for Arran.

He pitched the idea to US giant Hasbro, who agreed to produce the new edition after initially turning it down.

Graham said: “At first they said we were mad, trying to sell to just 4,000 people.

“I think people locally are excited to be part of a big brand but to have their own stake in it now.”

After realising the potential of the regional areas of Scotland, the firm has now designed the Highland Edition, which is to be launched later this year.

Graham added: “The strangest thing is that no one else has done it so far.

“The Highland Edition actually came off the back of our edition, so we’re leading the way this time.

“I have just one shop and I’ve got two part-time staff but we’ve sold 400 in two weeks and we’ve sent them off to places like Japan and Alaska already.

“There’s a company called Arran Japan, the owner of which has a house in Scotland, and I expect he will want some to sell there.”

Being a rail-free island the Arran Edition has replaced the famous stations with piers.

And the cheapest properties on the map, Old Kent Road and Whitechapel, have been replaced with Arran’s highest mountain, Goatfell, and the ancient village of Cladach – so as not to upset any of the islanders.

Graham’s son Carter, 5, already a budding designer, features on the box for the new edition.

He added: “Carter has already created his own take on Snakes and Ladders, Squirrels and Adders, after the creatures you find on the island, so this could be the start of a family business here.”