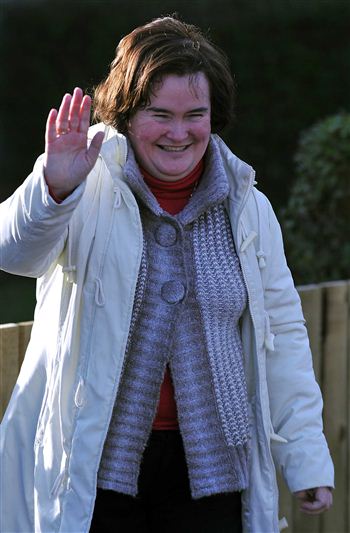 SUSAN Boyle has revealed that she almost gave up her dream of stardom before auditioning for Britain’s Got Talent.

The Scottish singing sensation spoke of her appearance on the talent show almost a year since she became an overnight star.

And the 49-year-old said the only reason she went on the show – paneled by Simon Cowell – is because of a pledge she made to her late mother.

In an interview on Australian television last week the spinster said she dealt with countless rejections from singing competitions before landing her big break.

She said: “I was rejected more times than I can remember at auditions before I went on Britain’s Got Talent.

“Everyone goes through the phase when they want to give up and if I had not made a promise to my mother to not give up, then I would have given up.

“I have to be perfectly honest about that. Mother meant a lot to me and that was the promise I made before she died, and that was really keeping me going.

“My mum must have picked my life. Before singing, I didn’t even have a path in life but something was set out for me. A lot of people have their life mapped out for them but I didn’t know what I wanted to be or what I was good at – I always kept down.

Susan made her life-changing appearance on Britain’s Got Talent almost one year ago – and a new series of the popular show starts next Saturday.

Her rendition of “I Dreamed a Dream” from the musical Les Miserables captured audiences hearts around the world and her debut album has sold more than 8.5 million copies worldwide.

On Saturday, Susan was posing for photographers outside her Blackburn home in West Lothian.

And she said she had never dreamed she would ever be able to visit Australia.

She said: “I am so excited. This time last year I never dreamed I would leave Blackburn. Now I am travelling to the other side of the world. Now, that can’t be bad.”