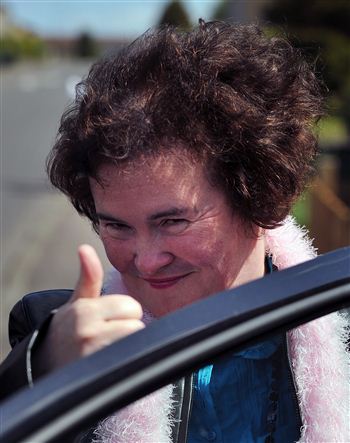 SUSAN Boyle has spoken of the terror she felt when she came face to face with an intruder in her own home.

The Britain’s Got Talent star said the crook “scared the living daylights out” out of her when he bumped into her as he fled her West Lothian home.

The 49-year-old was left shaken after the break-in, which took place just after she returned home from recording a single for the victims of the Haiti earthquake.

Susan had bodyguards watching her house around the clock after the break in, which was the second time her house had been targeted by intruders.

A 16-year-old had since been charged in the connection with the break-in, which followed an incident at Christmas where Susan saw two strangers peering through a back window of her home.

She said: “When I was coming home from my friends I opened the front door and the guy just came down the stairs and brushed past me.

“That scared the living daylights out of me and I don’t know how the hell he got in.

“There’s no question about it, my security was OK, it was just that particular night was a bad night.”

Despite the scare Susan has embraced the jet-set lifestyle and has performed across the globe, as well as appearing on OprahWinfrey’s talk show in the US and on TV in Japan.

Since its release her album, I Dreamed a Dream, has sold 10 million copies, and the star was recently given a £4million windfall on her birthday two weeks ago.

The next step for Susan is another album, which she says will be specially written for her, and a sell-out tour.

She said: “It has been an absolutely fantastic 12 months. I’ve been learning all the time about my singing and the world, been to new countries and I hope to learn more.

“Things have come on in leaps and bounds in the last year and I have had a good team around me and lots of support from everyone and fans, without which I wouldn’t be able to be where I am now.

“I’m very pleased my album sold that amount – I was someone who wasn’t a professional singer a year ago.

“I’m touched by the encouragement by the fans and I hope the next album can be as good as the first, if not better.

“That would be really challenging, either to tour or do gala performances.

“I’d like to do both, it all depends on how much time there is. I want to record my next album first.”

Since the release of her huge album Susan has had a hectic schedule of appearance across the globe, and the strain showed when she was reportedly seen screaming at her personal assistant Joanne at Heathrow airport several weeks ago.

She admits that the first few months of fame took some getting use to, she insisted she is becoming more comfortable with the pressures of the music business.

Susan said: “I love recording. The recording studio is your own space, it’s your bubble.

“Everything sits very comfortably on my shoulders now and I’m more relaxed. A year ago it was all new to me, I wasn’t relaxed – but who would be?”

The star put recent incidents at airports, including her running out of the same airport’s Terminal Five shouting “I’ve escaped, I’ve escaped!” and dancing with mop, down to her wacky sense of humour.

She also said that her collapsing before boarding a flight to France was down to her being too hot and insisted she is in good health and is well looked after.

SuBo said: “It’s my wacky sense of humour. I didn’t mean any harm and if I offended anyone it was just a piece of fun. I was messing about dancing and singing.”

“I’m absolutely fine. It was just a wee bit warm, which is why I fainted. These things get blown out of proportion.

“I’m getting all the care I need.”

Susan also admitted she is a huge fan of TV hit, the X Factor and had has taken the time to see the singers on the shows tour.

“I like wee Joe McElderry, what a personality he has. If I was a wee bit younger I’d probably fancy him.”

SuBo hinted that she would even like to sing for the pope when he comes to Scotland, saying: “The Pope is a very special person and singing for him within the mass, it’s not just for him, it’s for everybody.”

Despite her meteoric rise to fame, Susan, who still lives at her mother’s modest home in Blackburn, West Lothian, says keeps her feet firmly on the ground.

She said: “I don’t miss much about my old life because now I am really very happy and I can do more, I can see more people.

“I didn’t get out a lot. It has changed but it’s changed for the best.

“If my mum could see me now she’d probably be really proud and say, ‘well done Susan because that’s what I meant you to do.”

“It’s been a perfect year.”