A HEARTS fan employed to demolish part of the Hibs stadium has buried one of their rival’s shirts under a new stand.

And she is refusing to tell anyone where underneath the 6,400-seater stand the strip is, leaving some Hibs fans livid.

She said: “It was a joke among me and my friends at work, because we all love Hearts.

“I don’t know how the pictures got online but now I’m ready to deal with whatever the Hibs fans are saying about it.

“I don’t care what they say because at least it’s given the Hearts fans something to laugh about.”

She said she had read marriage proposals on a Hearts fan forum since her prank came to light.

And while she is prone to larking around on site, demolition worker Louise insists she is a hard worker.

She said: “I do really enjoy my job, so much so that I was working during the derby when Hearts beat Hibs 2-1 at Easter Road.

“I wanted to be able to see the game but couldn’t, so we had it on the radio while we worked.

“We were going mental like everybody else when the winning goal went in. 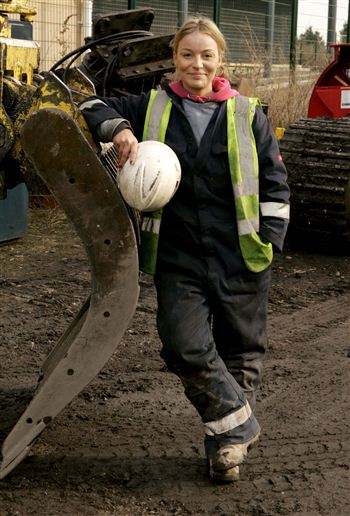 “If the Hearts fans love it and want to marry me for it then that’s even more funny.

“I just hope people take what I’ve done in the light-hearted manner it was done in.

“I’m not totally sure exactly which bit it is in, but it’s totally buried now so I don’t think it matters that much.”

Not even her own father, who owns the demolition firm she works for, knows where the maroon jersey is.

Louise posed for pictures and gave television interviews before knocking down the dilapidated east terrace in March.

And while clearly enjoying the demolition job, Louise claimed at the time: “I am doing my very best to be respectful.”

But once the TV cameras had gone, she secretly dug up part of the rubble and buried a permanent reminder of where her heart really lies.

Dad John, 51, is the director of Dalkeith Demolition – a family business of Hearts season ticket holders who spent a month ripping apart the Easter Road stand.

He said: “She is a cheeky lass, that’s for sure.

“Nobody had a clue about this until she posted the pictures online.

“I’ve been reading the Hibs message boards and some of them do not think it is very funny at all.

“But she has friends who are Hibs fans and I’m sure they’ll let her off eventually.

“I’m undecided whether she will be in trouble or not yet, but she is definitely keeping her job.

“People have to take it as good-natured banter.”

The Easter Road outfit refused to comment on Louise’s strip trick, but it was sure to be a talking point at tonight’s Hands of Hibs 20th anniversary concert.

The benefit show, featuring The Proclaimers and Fish, was hoped to be a celebration of the 20 years since Hibs faced extinction.

Some claimed she did it out of spite because Hibs were building a better stadium than Hearts’ Tynecastle ground.

One fan said: “All it shows is the absolute rage, anger, and jealousy she holds for the building of the new stand by us.

“Waiting year after year after year for a new Hearts stand and the ‘hobo’ team go and build one with little hassle and within a few months will have the best stadium outside Glasgow by far and they are left with the lovely asbestos stand.”

Another wrote: “Just think, every time we do the Hibees bounce in the east we’ll be jumping up and down on a dirty Hearts top and stamping it further into the dirt where it belongs.

“They’re so beneath us.”

A spokesman for Hearts was unwilling to be drawn into the debate.

He said: “We knew Louise was a Hearts fan and part of the demolition team.

“But the shirt is something she has decided to do and we will leave her to get on with it without giving a view on it.”

Easter Road legend Pat Stanton said he could see the funny side of Louise’s prank.

He said: “It doesn’t bother me in the slightest, and I don’t suppose it will bother many other Hibs fans either.

“It’s quite funny that someone has gone to the lengths to do such a thing.

“What the builders leave behind on site is up them I suppose.

“I’ve got a lot of good friends who are Hearts supporters and the rivalry has always been friendly.

“I would just like to look at it as a wee bit of fun, although others may see it differently.”