A WHEELCHAIR bound man viciously beaten by muggers at the weekend later tried to kill himself fearing police didn’t believe his story.

Tetraplegic Garry Pearson, 44, from Oxgangs in Edinburgh, said the trauma was made all the worse when he was asked by detectives if he had made up the assault as part of their ongoing inquiry into the attack. 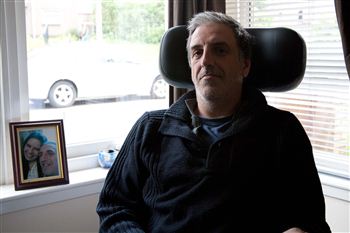 Now recovering at home after his suicide bid, he said he is now too terrified to open his own door, adding: “It’s been a terrible ordeal.”

Garry who was left disabled after a brain haemorrhage four years ago uses an electric wheelchair to get around and was set-upon by two men just yards from his home on Saturday morning.

After blocking the man’s way on Oxgangs Drive they repeatedly punched the helpless man before robbing him.

They hurled abuse at him over his disability, beat him about the head before robbing him of his mobile phone – his lifeline to the outside world – and wallet.

Their shaken victim was left with cuts, bruising and swelling to his face and was taken to Edinburgh Royal Infirmary for treatment.

Police investigating the case are hunting the two men who ran off following the cowardly attack around 9.40am.

But Garry said he tried to take his life after police later questioned whether the attack had happened.

Shattered Garry – who was a gardener before he was left paralysed by his brain haemorrhage and lives alone after wife Marion died from cancer – admitted: “It has pushed me to the edge.”

“It happened just up the road from my home, they stole a phone and my wallet with around £70 in it.

“They were blocking my way and I said ‘excuse me, can I get through?’.

“I tried to push one away and got whacked on the side of my face.

“It has been a terrible ordeal.

“I am frightened to go out of my front door.

“I won’t go out on my own anymore and if strangers come to the door I won’t answer it to them.”

“One of the police accused me of doing it to myself – I only have one arm that works and I would not be able to reach some of the places where I was hurt.

“They said that they had to investigate every aspect of the case. That is what upset me most and what made me do what I did.”

Garry text one friend saying: “CID were b*******, I can’t take it anymore, I don’t care anymore. I have done something stupid just now, but I don’t care I have had enough. I just want to go to sleep and never wake up again. Take care of yourself, Garry.”

An ambulance crew raced Garry to Edinburgh Royal Infirmary at around 10.20pm after frantic calls from worried neighbours.

An ambulance worker confirmed that they had been called out to a patient who had taken an overdose.

They said: “We got a call for an overdose at 10.20pm. The patient was taken to Edinburgh Royal Infirmary.”

NHS chiefs confirmed he was treated after taking overdose of anti-depressants on Monday night.

Police launched an investigation into the robbery and have appealed for witnesses to come forward.

Both suspects are described as being white, between 16 and 17 years old.

One is around 6ft tall, of medium build, with blonde hair and was wearing black jeans and a blue t-shirt.

The other is 5ft 10ins tall, of slim build, with short dark hair. He was wearing blue jeans and a grey hooded top.

A spokesman said: “As is standard practise during any police investigation, detectives will thoroughly question the victim to determine the circumstances surrounding any incident reported.

“Lothian and Borders Police strive to deliver the highest standard of service when dealing with victims of crime but must explore all lines of enquiry to ensure the appropriate response is taken.”